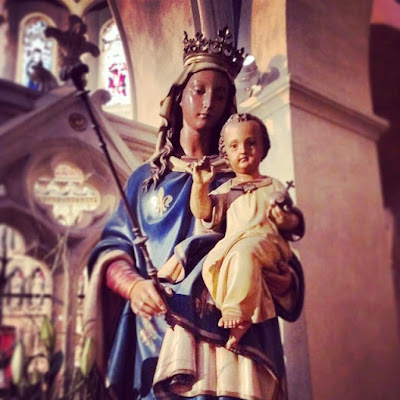 Christ and His Mother at St Aloysius in Oxford.
Tolkien's Virgin Mary.

I want to quote few fragments of George Sayer's Recollections of J. R. R. Tolkien from Mythlore No. 2 (1996) - full text can be found here.

(...) I went back and found him kneeling in front of the Lady Altar with the young children and their mother, talking happily and I think telling stories about Our Lady. I knew the mother and found out later that they were enthralled. This again was typical; he loved children and had the gift of getting on well with them. “Mummy, can we always go to church with that nice man?” The story also illustrates one of the most important things about him, his great devotion to Our Lady. He wrote to me years later a letter in which he stated that he attributed anything that was good or beautiful in his writing to the influence of Our Lady, “the greatest influence in my life.” He meant it. An obvious example is the character of Galadriel.

(...) One of the advantages of the house in Sandfield Road was that Tolkien’s doctor, Humphrey Havard, lived in the same street, only a few doors away. He sometimes took him to church. I once asked him how he was and had the answer:

All right now, but I’ve been in a very bad state. Humphrey came here and told me that I must go to confession and that he would come early on Sunday morning to take me to confession and communion. That’s the sort of doctor to have.

This story shows his humility. He had a very low opinion of his own merits, and fairly easily got into a depressed state when thinking of his faults and deficiencies. Life was a war between good and evil. He thought the sacraments freed one from enthralment to Sauron. Once he spoke to me of Ireland after he had spent part of a summer vacation working there as an examiner: “It is as if the earth there is cursed. It exudes an evil that is held in check only by Christian practice and the power of prayer.” Even the soil, the earth, played a part in the cosmic struggle between forces of good and evil.

He thought hatred of Catholics was common in Britain. His mother, to whom he was most deeply devoted, was a martyr because of her loyalty to the Catholic Faith, and his wife, Edith, was turned out of her guardian’s house when she was received into the Church. In 1963 he wrote in a letter:

And it still goes on. I have a friend who walked in procession in the Eucharistic Congress held in Edinburgh, and who reached the end with a face drenched with the spittle of the populace which lined the road and were only restrained by mounted police from tearing the garments and faces of the Catholics.

He found little or nothing wrong with the pre-Vatican II Church, and therefore thought the reforms of the 1960s misguided and unnecessary. He frequently complained about the new English translations of the Latin texts used in Catholic services, because they were inaccurate or in bad or clumsy English.

Lewis told Tolkien that of all his friends he was “the only one impervious to influence”. This was largely true. It was no defect. Combined with his belief in all the traditional virtues such as courage, loyalty, chastity, integrity and kindness, it gave to him as a man and to The Lord of the Rings tremendous moral strength. He was unswervingly loyal to the Christian Faith as taught him by his guardian and benefactor, Father Francis Morgan.

My photo from St Aloysius was denied on the Tolkien Society FB forum because we cannot discuss there J. R. R. Tolkien's faith