Have you ever considered, as you commence a new project, painting, sculpture, or now possibly a video, that what you are creating might be one of the most memorable works of art ever created?  Probably not.  Artists are known to have healthy egos, but it might be pushing even the artist's imagination to place ones work on such a pedestal.  Then again, maybe not.

If asked to name the most famous painting in the world, most people would tend to think of Leonardo DaVinci's Mona Lisa. Housed today in the Louvre in Paris, the painting has one of the longest, most illustrious, most well-documented histories imaginable. Stolen, ransomed, nearly destroyed, the Mona Lisa has almost taken on a life of its own. Yet, it all began quite simply. Commissioned about 1503, and worked upon by the master intermittently for nearly two years, the portrait was never delivered to its buyer. It was an unfulfilled commission for which Leonardo no doubt went unpaid. Such things happened then.  They happen now.  As a result, Leonardo is known to have kept the painting with him for the rest of his life. An interesting birth, but not all that exceptional at the time. 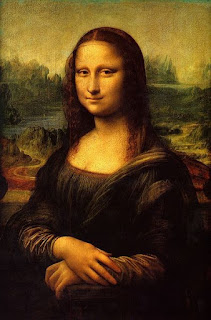 Mona Lisa, 1503,
Leonardo DaVinciMuch has been made of the subject's enigmatic smile. Recent computer analysis has suggested the entire painting may have been something of a self-portrait though the evidence to such a theory is rather convoluted at best. A more likely theory, given the nature of Leonardo's analytical mind, is that he relied on elements of geometry perhaps more than physical likeness (which might explain why the portrait was never delivered if doing so made for a poor likeness).

If one were to place a compass point precisely between the subjects eyes, then adjust the pencil point to her lip line, the resulting circle would precisely coincide with the outer edge of the model's cheek structure and hair on the left, the edge of her hair net near the top of her forehead, and the hairline itself on the right side of the face. Check it out. You'll never look upon this famous face again in the same light.

But, is this bit of simple plane geometry applied to the human face what has made the Mona Lisa the most unforgettable painting in the world today?  Leonardo was a master painter, no question about that.  Yet, is that fact sufficient to have elevated this inauspicious portrait with its questionable likeness to such a high plane?  The enigmatic smile?  The gentle, lovely face?  The mysterious, unearthly, mismatched backgrounds on either side of that face?  What is it about The Mona Lisa?  Perhaps it's all of the above.  Or maybe it's simply the lady herself.

Warning: Invalid argument supplied for foreach() in /www/wwwroot/domain.com/cepot/post.php on line 57