The Case Of The Bogus Detective 33 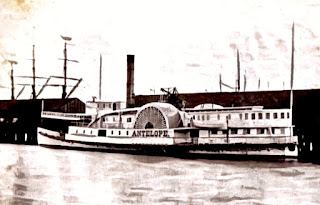 Riding in the back of that stagecoach, I fell into a deep & dreamless sleep. Sometimes I half woke up when we reached a station & they opened the mail boot, but it was always to put something in. Nobody saw me burrowed in my nest. I slept through Placerville which used to be called Hangtown. I slept through Diamond Springs & Mud Springs & Buckeye Flat & Shingle Springs & Durock’s & Mormon Tavern & Folsom where there is a big prison full of desperados. I slept for about 7 or 8 hours and when I was woken by the letter-sacks being lifted up & out, it was like a resurrection. I suddenly felt damp & shivery & exposed, like a butterfly whose chrysalis has been peeled off too soon.

I blinked up into the face of a big, black-skinned man who had been hefting out the mail-bags.

Behind his head I saw the pale purple sky of dusk.

He was making Expression No. 4 – Surprise.

I said, ‘I am half Indian so they made me ride in the mail boot.’

Before he could question this statement, I said, ‘Is this the right place to catch a steamer to Frisco?’

‘Do any of the steamboats travel by night?’

‘Not usually,’ he said slowly. ‘But the Antelope, she be delayed by boiler problems. They had to fix the machinery. She just about to embark now. She be right over there.’

I tried to move but my legs were full of pins and needles.

‘Will you help me get out?’ I asked. ‘My legs are full of pins and needles.’

He helped me get out.

‘Thank you, sir,’ I said. ‘May the Lord bless you for your kindness.’

As I hurried in the direction he pointed, a sudden Thought came to me. If the steamship to Frisco had been delayed, maybe I was not too late to catch that murdering Ray G. Tempest. He might be on board with his dung-smelling booty!

I was bare-headed but double-coated & still wearing button-up boots. I ran tippy-tappy across the levee dodging people & pack animals & piles of suitcases, etc.

I saw a line of people shuffling onto a big steamboat: the Antelope.

In the dusky half-light it looked like a white hotel with a big smokestack rising up out of it & a big wheel on the side. I could not even see the river, though I could smell it.

As I went across the wooden wharf, I saw a sign:


PASSAGE TO SAN FRANCISCO$2.00 Cabin50 cts Steerage
‘Excuse me, sir,’ I asked a man in the line. ‘Where do you buy tickets?’

‘Get away, Injun!’ He raised his cane to strike me. ‘I know your type: beggars and pickpockets!’

I backed away, but a woman pointed. ‘Over there,’ she said. ‘But this steamer is full and the ticket office closed for the day.’

The woman was dressed all in black. She had three children with her: two hatless little boys and a girl in a tattered bonnet. I reckoned she was a widow so I thanked her but stayed close. I shuffled along behind them in the evening gloom & hung my own hatless head like her twin boys. I hoped the ticket man would think I was with them, and he did, for he let me pass. Hallelujah! I sent up a silent thank you to the Lord.

I followed the widow woman & her family into the ‘steerage’ section. It was like a wide wooden corridor with wooden chairs all ranked in rows.

There were no empty chairs left, so the woman sat on the hard floor by a wall and gathered her children around her. The little girl started to cry.

‘Shush, Eunice,’ said the woman. ‘Crying never did nobody no good.’

I hoped she would not notice but she did.

‘Did you follow me?’ she asked me in a low voice. ‘What do you want?’ Her face, half hidden by a black poke bonnet, was pale.

‘You do not look like a private eye in disguise. You look like a desperate half Indian pickpocket. I am in half a mind to summon a steward.’

I was interrupted by a terrible grinding that started low but got louder & louder & then ended in a shriek. I had heard of boilers exploding on steamboats and sending scalding bodies flying a mile high into the air. But nobody else seemed to mind so I guessed it was normal.

‘Go along now,’ said the widow lady. ‘You cannot stay here with me. I used the last of my money to buy this ticket and I can not fend for another child.’

‘Please,’ I said above the noise of the throbbing engines. ‘You do not have to fend for me. Just let me stay here with you until we get to Frisco. Then I will leave you alone forever. But I need you to pretend I am your kid, if anyone should come by.’

I could see she was wavering.

I stood up & unbelted my greatcoat. Without removing it, I took my arms out of the sleeves & shrugged off the velvet sacque from underneath & put my arms back in the coat sleeves & stepped out of sacque which was now on the floor. I picked it up & held it out to her.

‘Here,’ I said. ‘You can keep this purple velvet silk-lined, ermine-trimmed cape as proof of my good will.’

She took off her own thin shawl & wrapped it thrice around the narrow shoulders of her little girl & put on my velvet sacque.

Then she began to weep.

‘Oh,’ she said, stroking it. ‘I never felt nothing so beautiful and warm. Children, feel the fur!’

Eunice and her twin brothers all snuggled up to their ma & stroked the velvet cloth & white ermine trim of the sacque. Without exchanging a word or glace, the twin boys burrowed under the sacque, one on each side, so that the mother looked like a big purple hen sheltering chicks beneath her wings.

Eunice curled up on her ma’s lap & fell asleep sucking her thumb.

‘Come sit here,’ said the woman to me, as the boat started to move.
I sat down on the floor with my back against the wooden wall. I could feel the whole boat pulsing.

Out of the corner of my eye, I saw the ticket-taker coming.

What if he asked me for my ticket and found I did not have one? Would he toss me in the river?

‘Lean your head on my shoulder,’ urged the widow lady. ‘Pretend you are asleep.’

I leaned my head against the widow lady’s shoulder & pretended to be asleep. In the golden light of oil-lamps would he notice my skin did not match her other children’s? His footsteps went past so I guessed he had not noticed.

Soon they dimmed the oil-lamps and most everybody slept, including the widow lady.

But I had just woken from my 8 hours good sleep the depths of the stagecoach so I was now wide awake. I reckoned it was time to see if my enemy was aboard.

I crept up and down steerage and sniffed the keyhole of each cabins. Mr. Ray G. Tempest and his dung-smelling gold & silver sacks were not there.

I went downstairs to the engine room which was like the Fiery Place with its heat & noise & its diabolical pounding pistons & half-naked men all glistening with sweat as they shoveled wood into a gaping mouth of fire. Mr. Ray G. Tempest was not there.

I went outside into cool damp night air but found only a narrow walkway ending in the starboard paddle-wheel on one side and the port paddle-wheel on the other. The turning wheels slapped the black water into pale foam that glowed for a moment & then melted into darkness behind us. The sight of it and the swishy noise almost entranced me but I was brought to my senses by a shower of sparks falling around me.  I looked up and saw they had come down from the towering smokestack.

While I was looking up, I saw another deck up there. I followed the pointing finger up stairs to the HURRICANE DECK at the top of the boat.

Mr. Ray G. Tempest was not up there.

I saw a lone man, smoking a pipe in the moonlight.

The man was leaning on a rail, looking out at sedge & tule reeds poking up from black sheets of standing water.

I went over and leaned on the rail beside him.

He was smoking St. James Blend, the same tobacco my photographer friend Isaiah Coffin smokes. The smell of it made me pang for Virginia City. But I had Burned My Bridges and would not be returning there any time soon.

The man with the pipe introduced himself as Mr. Alfred Doten. He told me the Antelope was the best steamer of them all.

‘She is a hundred and fifty feet long,’ he informed me. ‘And she carries up to three hundred passengers. There is a special reinforced room right in her middle,’ he added. ‘It is called the Gold Room.’

He nodded. ‘It has got an extra strong floor so the gold does not fall through and sink the boat.’

‘Do you reckon it is strong enough to hold an ox-cart full of dung-smelling gold and silver?’

I was about to ask him to show me where it was. Then I had a thought.

‘How long would it take a stagecoach to get from Friday’s Station to Sac City?’

He puffed his pipe for a moment. ‘About eight hours, I reckon.’

‘And what about an ox-cart?’

I thought, Dang! Ray was in a slow-but-steady ox-cart while I had been flying along on a stagecoach that changed teams of horses every 15 miles. Even though he had a four-hour start, I probably overtook him somewhere on the road while I was curled up asleep in the mail boot!

At first my spirits sank. Then I had another idea.

I turned to Mr. Alfred Doten. ‘Have you heard of the Occidental Hotel?’

‘Why surely,’ he replied. ‘It is one of those fancy new hotels on Montgomery Street.’

I pulled out the cherry red slip in my pocket and showed it to him.

‘Is it near the What Cheer House?’

Hallelujah! I said to myself. If Mrs. V. F. von Vingschplint is still at the Occidental Hotel then I can find out what role she played in all this & solve the mystery & clear my name.