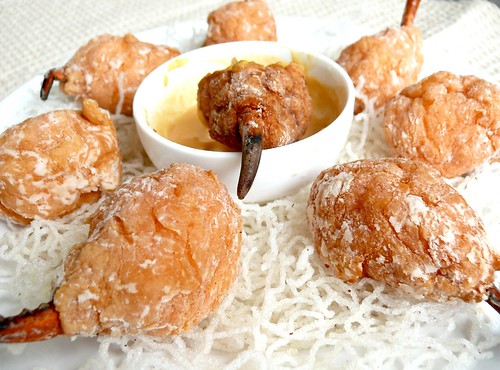 Not stuffed but wrapped with prawn paste,these claws should be re-named crab drumsticks because that's what they look like. You make a springy prawn paste, stick a crab claw you've salvaged from your last crab meal and deep-fry the lump of paste into a crispy tasty drumstick which you eat with English mustard sauce or Worchestershire sauce. Super yummy. Wey went, "Ummm, mom, this is the best!" and emphasized it with his eyes closed, smiling. From a person who doesn't eat seafood, it is a compliment to die for. Love the boy. He always hit the nail on my head when my cooking falls short, no feelings spared. But when the food's good, he'll tell me with a flourish too. Ming came down, took a bite and said, "Wow, mom, this is really really good. Seriously good." By this time I was all puffed up. Hub came home, took a bite and I had to coax him to say it was the best he'd ever eaten. Ego slightly deflated, I consoled myself that Hub was not as encouraging because by the time he came home (I had to fry the claws before the sun went down to take my photos) the drumsticks had softened in our humid weather.

Crab claws was a banquet item for weddings and birthdays when I was, let's just say, much younger. These days, only Diamond restaurant in Foh Sang and Winner Hotel serve this dish and their crab claws do not taste as good. This could be because prawns are now considerably pricier and lower-grade white prawns are used, alongwith lots of pork fat. I find that hard-skin or sand prawns are a good substitute for the expensive yellow prawns although for this recipe I used white prawns just because that was what I had in my fridge, although as a rule I don't buy white prawns anymore because I found out recently that white prawns are farmed which means they are full of antibiotics and processed feed.

If the fire's too hot, your crab drumstick not only will be too brown (look at the one in the center of the first picture) but it will also puff up way too much so that when it cools it will shrivel. The only problem with this recipe is I can't get the crab claws to stay crisp. Re-frying them will get them crisp again and that's probably what the restaurants do. Any idea how to overcome that? 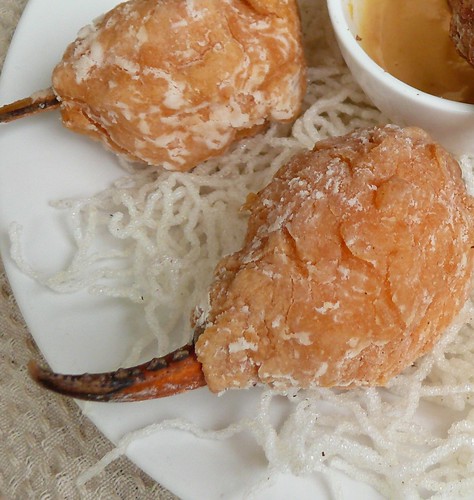 1. Using your hands, knead the bicarb of soda into the prawns. Leave 1 hour. Rinse and dry the prawns on paper towels, then mince them in a food processor until fine. Put prawn paste into a large bowl. Cut the pork fat (get the thick firm fat) into very tiny bits, size of a green bean or smaller but don't chop into a paste. Mix fat into the prawn paste together with all the seasoning ingredients and, using either your hands or a large metal spoon, churn the paste round and round in the bowl. After a while the paste will turn whiter and stiff. Keep churning because the stiffer the paste the more springy the bite when the paste is cooked. Leave paste in fridge to firm up, about 1/2 hour at least.

2. Put 1 cup cornflour on a plate. Using a dinner spoon, roughly divide the paste out into about 8 portions to make sure you get drumsticks of uniform size. Scoop a heaped dinnerspoon of the prawn paste and dump it on the cornflour, using another spoon to scrape it off the dinner spoon. Put a crab pincher on the paste and with floured fingers, gently mould the paste around the pincher, patting it into a nice drumstick shape, with lots of flour coating it. Place it on the plate of cornflour. Repeat until all paste is used up. Put drumsticks into fridge for another 1/2 hour so it is easy to handle.

3. Heat up oil (enough to cover) in a wok or pot and deep-fry the crab drumsticks in 2 or 3 batches. Make sure heat is medium hot. It will take only 2 minutes or so to cook. Time one and see how long it takes because cooking time depends on the size of your drumstick.

Serve with Worchestershire sauce or English mustard. Good as a snack or make them smaller as appetizers or hors d'oeuvres.