Reading The Classics: The Woman In White By Wilkie Collins 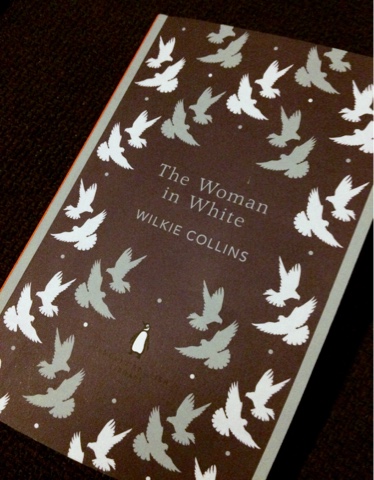 I picked The Woman in White from my reading list because I wanted a book I'd actually enjoy after too many hard slogs. I loved Collins' The Moonstone, so The Woman in White was an easy pick.
As I was reading it continued to amaze me how modern and clear Collins' prose is, especially compared to many of his contemporaries. I also admire how Collins draws his characters with a deft hand, transforming a collection of telling details and quirks into living, breathing people. Collins was very popular in his time, but the critics and the literati were harsh on him and considered his stories lurid melodramas. Reading his novels now you can see why he was popular; Collins has a knack for twisty plots, rising tension, and cliffhangers. The Woman in White was originally published in serial form in 1859 to1860, and I can just see people lining up for their copies of All the Year Round , slavering for the next instalment.
The book tells the story of Walter Hartright, a young drawing master who falls in love with his pupil, Laura Fairlie, who is engaged to another man, Sir Percival Glyde, who is up to no good. The mysterious woman in white hints at horrible secrets to be revealed, and Walter and her sister Marion are caught in a desperate struggle to free Laura from her dangerous situation. On Percival Glyde's side we have Count Fosco, probably my favourite of the characters in the book, in a love-to-hate-him way. I also liked Marion, who is a very modern character for the time, in that she's strong and has agency, even though her options and actions are limited by the time period. The main couple, Walter and Laura, are actually pretty whitebread, but it might have been hard for the readers of the time to root for a heroine like Marion.
Like The Moonstone, The Woman in White uses multiple first person narrators. This is a good structural choice as it highlights Collins' talent for unique character voices. You can see it particularly well in the invalid Mr. Fairlie's (Laura's uncle) chapters, for instance. For me, the most memorable passage was the excerpt from Marion's journal where she draws a captivating portrait of Count Fosco.
I would recommend giving The Woman in White a try even if you usually find classics difficult or boring, because it's neither. There is a bit of rambling, as in most novels from this period, but this is a great and very entertaining read.
For writers there's a great deal to learn here about character-building, plotting, and keeping the reader hooked. You can also learn about period style from reading Collins, especially if you're writing historical fiction or steampunk stories set in the Victorian era. Because Collins' prose is so clear and modern, I feel it's a good place to start when trying to get the 'feel' of an 1800s narrative without frustrating your readers with overly complicated prose. (If you try to emulate Dickens you'll probably end up sounding quite old-fashioned.)
Oh, and on a semi-related note: Dan Simmons has written a fascinating novel that has Wilkie Collins as the main character, Drood. It has horror elements and I love the way Simmons explores the relationship between Collins and Dickens. It makes a nice companion piece if you're reading Collins' and Dickens' novels.
Classics read: 29/100