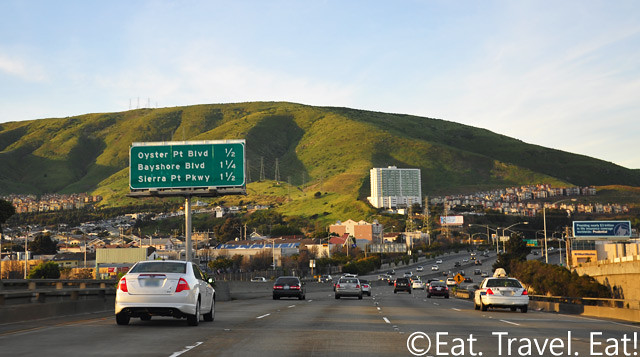 Driving back from Stanford and the event, we were met with a pleasant sunset; the sun made the green mountains shine even more so, and everything became even more picturesque. During our drive we made dinner plans; after crossing off one Chinese restaurant off the list to visit (Koi Palace), we decided to visit another one: R&G Lounge in Chinatown, which our friend recommended us to visit. 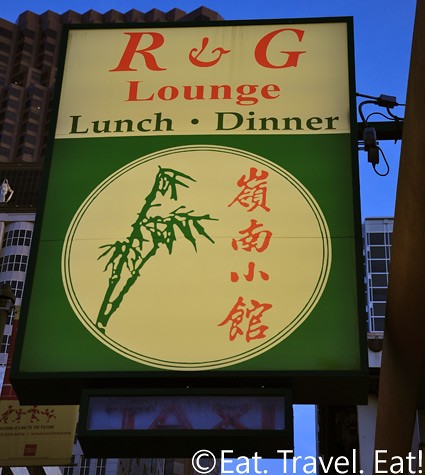 Parking was easy to find; there is a parking structure that offers validated parking a block or so away from the restaurant. However, getting the seat at the restaurant was not. We forgot to make a reservation, which I highly advise making for any popular restaurant when visiting San Francisco such as this one, and as a result we waited for 45 minutes for an open table. 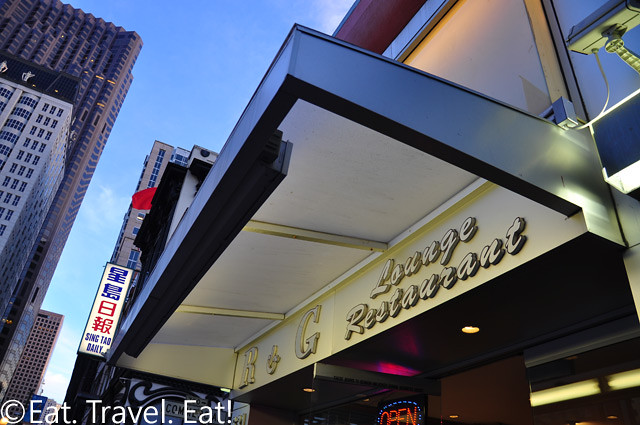 What can one do in a loud, crowded atmosphere with no book? I spent my time taking pictures and learning about how the queue system works instead. Like some restaurants in Hong Kong, R&G utilizes a computerized queue system that splits a certain type of party (e.g. 1-2 people, 7-10 people) to a separate queue which will then notify the employee when that certain type of table is ready for the customer.
We also talked to the employee about San Francisco and seafood; she told us that she eats live seafood when she visits the Los Angeles area instead of in San Francisco, although she will occasionally go to San Francisco's Fisherman's Wharf for seafood. 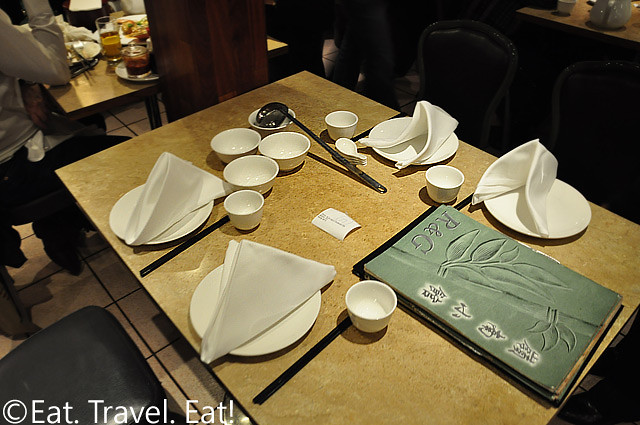 Downstairs, it was not actually as modern as the entrance or the name suggested; instead, it was a blast from the years past; something akin to Sam Woo BBQ in San Gabriel. The prices however were definitely not Sam Woo prices; they were much more expensive! 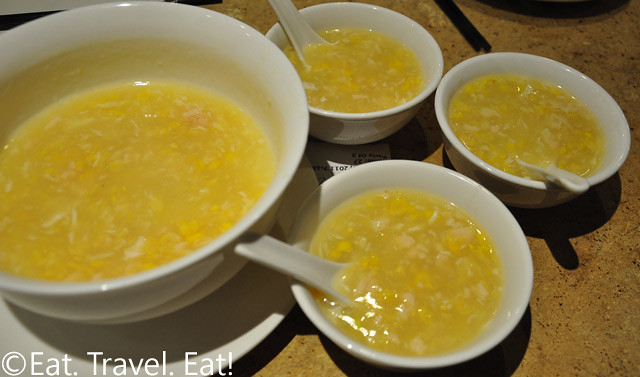 We began our meal with hot steaming bowls of mashed chicken and sweet corn soup (bowl, 12 USD). It's a traditional preparation: lots of starch was applied to create the "thick, savory broth," while corn, wispy strands of egg, and "tiny pieces" of chicken were interspersed throughout the soup. We enjoyed light flavor of the soup that was enhanced by the sweet corn. 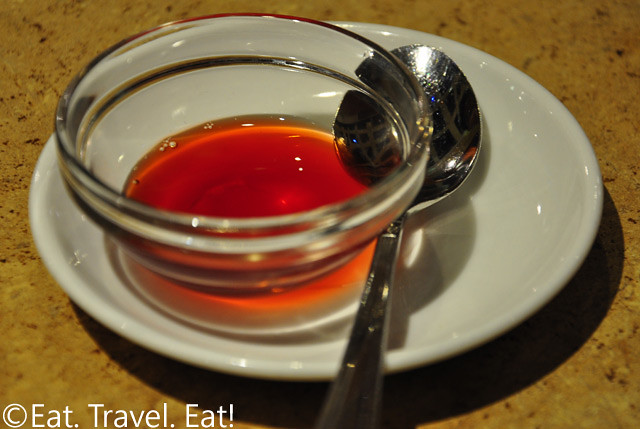 Vinegar is sometimes added as an accompaniment to the soup, but the amount given from our request was miniscule. This saucer barely fulfilled what someone would put for one small bowl of the soup. 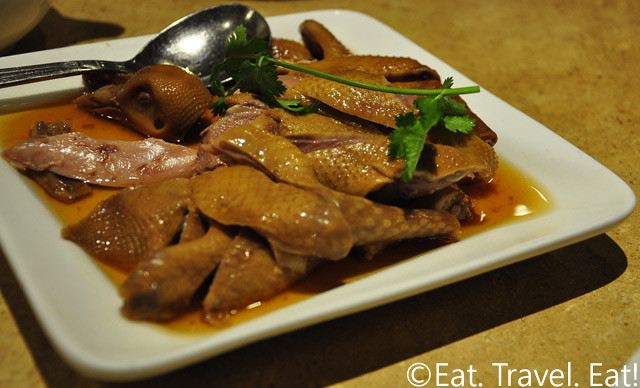 The drunken squab (17 USD) on the other hand was extremely flavorful. The wine marinade had an extremely strong flavor due to the alcohol content, yet the squab retained its own flavor while being nicely accented by the marinade. 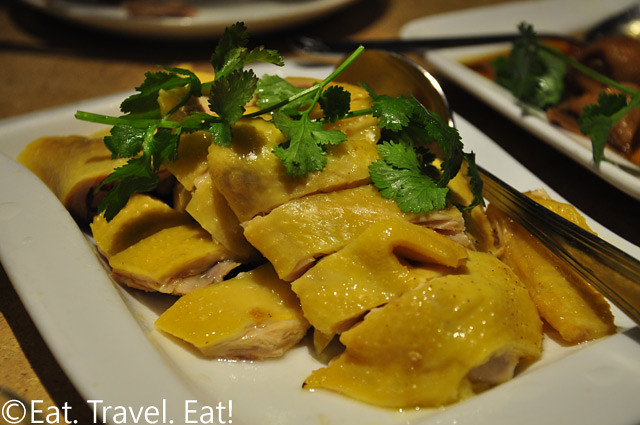 R&G's princess chicken (half, 15 USD), also called gwei fei chicken, was a fine rendition. The free-raised chicken meat was fragrant, tender, and supple, with its flavor enhanced by being marinated with salt, green onion, and some sesame oil. It wasn't as "chicken-y" in flavor in comparison to what we have had in Hong Kong, but nevertheless was pretty good. Likewise, the green onion and ginger dipping sauce was fresh and pretty good, but not outstanding. 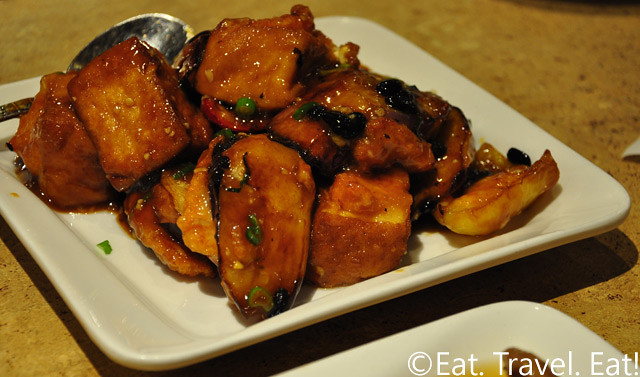 We liked the three treasures with black bean sauce (14 USD); which is essentially shrimp paste stuffed in cubanelle and red peppers, between coins of eggplant, and pockets of soft egg tofu. The black bean and soy sauce sauteed with spring onions provided plenty of flavor to this well-executed dish. Unfortunately, my companions found the peppers to be exceedingly spicy-- probably the white membranes were not cut out well. I on the other hand found the peppers to be fine; I guess I was lucky! 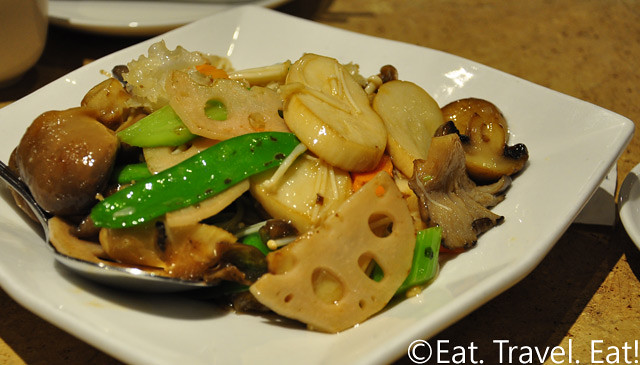 Various high-quality ingredients, including celery, carrot, lotus root, sugar-snap peas, snow fungus, and button, enoki, and oyster mushrooms, were used in the creation of the mixed vegetables with mushrooms (18 USD). These vegetables were served mainly as-is, passed through the hot wok with oil and salt to the plate, which allowed us to enjoy the existing flavor of each ingredient. 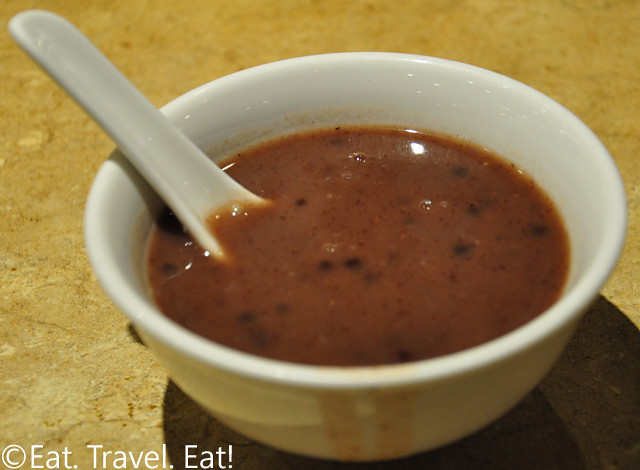 Restaurants in Chinatown seem to vary their service and items depending on the race of the customer; this red bean tapioca dessert soup was only served to Asian customers, while fortune cookies were served to everyone else. In Philadelphia's Chinatown, one restaurant served fried wonton wrappers with sweet and sour sauce were served to non-Asian customers, while Asian customers received nothing. I feel that R&G should serve this red bean tapioca dessert soup to everybody; the red bean and fat tapioca pearls were tasty, and the dessert soup was nicely sweetened too. People should taste this; if you happen to receive fortune cookies, ask if they could give you this dessert soup instead. 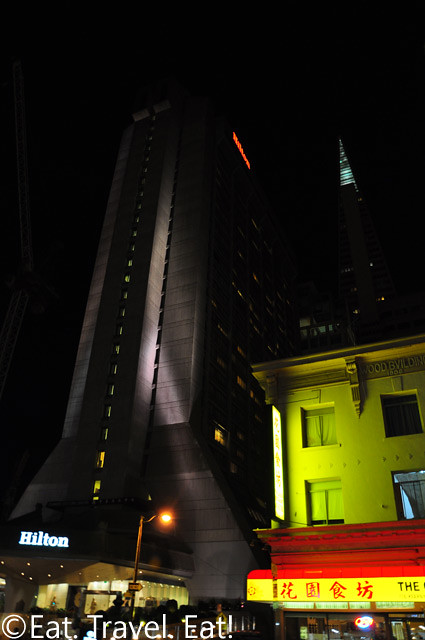 (Hilton in Chinatown, located nearby R&G Lounge)
R&G Lounge we felt was competent in their offerings, but there was certainly some influence from the customers in their food, like the heavy use of starch to thicken sauces and the offering of fortune cookies to some customers. 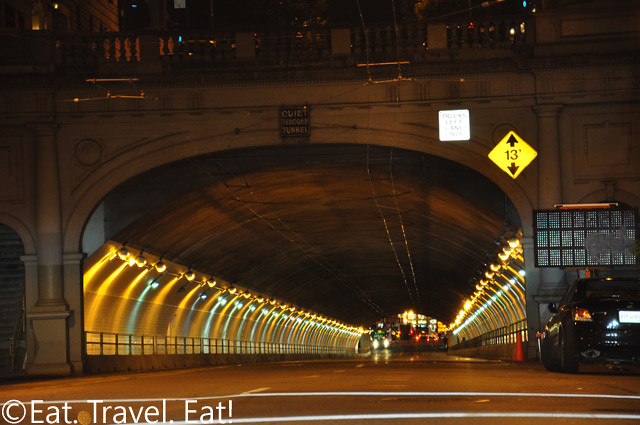 And so the second day of our Bay area trip arrived at a close. It was time to get ready for some more college and attraction sight-seeing!