"And you may find yourself, living in a shotgun shack...and you may ask yourself - well how did I get here?.."

The opening verse of Talking Head's "Once in a Lifetime" seems appropriate enough to open with, as I'm not really sure why I bought this building, since it doesn't really fit well with any period I currently play. But it was nearly half the retail price on Ebay, and being curious about it since its release a few months back, I snatched one up.

Like all of 4ground's kits, it's quite nicely packaged in its own cardboard box, with the sprues being packed again in plastic inside. There are 7 sprues altogether - 4 unpainted MDF "interior" sprues, 2 painted MDF exterior sprues (painted in a very light yellowish-tan color), and 1 painted MDF roof sprue (painted in black with a satiny finish to mimic tar paper).

The instructions are pretty well detailed, though they are lacking in particulars. Building the interior is simple and straightforward, but it becomes increasingly necessary to dry-fit many of the pieces after this. The foundation in particular would be easy to screw up, since the front and back porch holes need to be positioned accurately below each door. Position them wrong and the back porch could end up mounted under the back window.

As mentioned earlier, the interior is built first and is the easiest portion of the build. Following most other 4ground buildings, the interior is assembled as a box and the exterior walls and foundation are glued around the outside of this box. If you're new to this two-step build process, do yourself a favor and grab clothes pins or clamps beforehand to hold pieces in place as the glue dries. After the interior, the foundation is assembled, then the exterior sides are glued on, and then the porches are assembled and glued on. The porch stairs - while quite nice - are rather flimsy and I can see them being prone to breakage in storage if you don't mount the building on a larger base. For this reason, I left both sets of stairs unglued and removable.

The windows are assembled next and are probably the worst part of the assembly. The window frames and sashes are two separate pieces and, because of the lasercutting, the sashes don't fit snugly inside the frames. There is quite a bit of "play" around all the sash edges, which requires a lot of glue to fill and join. I use wood glue on all my MDF builds and I would suggest using that or superglue for the windows to get a stronger bond. On the other hand, I love the addition of the window sills, which give the windows a very realistic look. After this is the exterior doors, roof trim, and porch railings assembly.

Finally comes the roof. The main roof is very easy to assemble, however care must be taken when assembling the porch roofs. The connecting pins on the porch railing are placed over a point where there's no support. You need to hold a small piece of strong wood or metal under the porch railing connector while pushing down so it does not snap off. 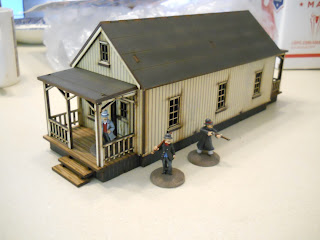 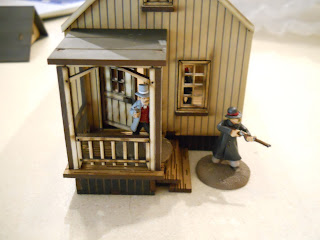 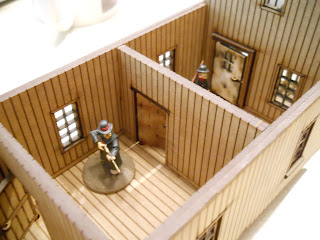 The finished building is quite nice and well worth the effort. It's pictured above with several Artizan and Knuckleduster 28mm figures and I think it scales well. It takes up a nice chunk of tabletop (~11" long by 4" wide), without being imposing or out of proportion and would serve well as an LOS blocker. Being a shotgun shack, it would work best in any Americas-based game from the late 19th century to modern times. In my opinion, it could also work fairly well as a colonial style building built by Europeans in other parts of the world during the late 19th to early 20th centuries and, suitably distressed, would also fit in a post-Apocalypse setting.

Ultimately, the question becomes is the $34 price point reasonable? I would say, if you play a lot of Americas-based games, it's probably worth it. Otherwise, this is a building with a very regionally-specific architecture that wouldn't find a lot of use in other games. I could be wrong. I paid much less than that for mine and I'm happy with it for what I paid.