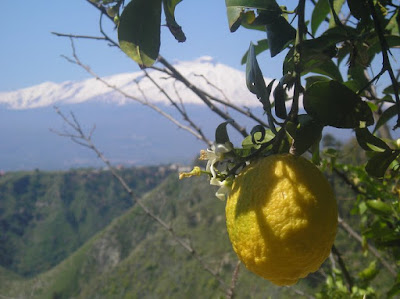 Have you ever wondered how does winter and spring come?

You can think about it in a boring scientific way or you can think of it in a more magical mythological way.

Located in the middle of the Mediterranean, Sicily has a mixture of ancient history which creates a unique and timeless atmosphere.

Sicily once formed a significant portion of Ancient Greece. The first Greek colony was founded at Giardini Naxos in 734BC. In 733BC, the south eastern city of Syracuse became one of the earliest Greek cities on the island. It quickly attained wealth and power, important buildings were commissioned, works of art created and sub-colonies were founded. The Greeks of Syracuse then extended their territory through warfare becoming the strongest city in the Mediterranean.

Along with the Ancient Greeks came tales of Greek myths and legends many of which unfolded on our beautiful island.

In ancient Greek religion and mythology the twelve Olympians are the major deities of the Greek Pantheon. They are known as Zeus, Hera, Poseidon, Demeter, Athena, Apollo, Artemis, Ares, Aphrodite, Hephaestus, Hermes and Hestia. They were called Olympians because they were considered to live on Mount Olympus. Although Hades was also a major god and was the brother of the first generation of Olympians (Zeus, Poseidon, Hera, Demeter and Hestia) he lived in the underworld, far from Olympus and therefore was not considered to be one of the Olympians. 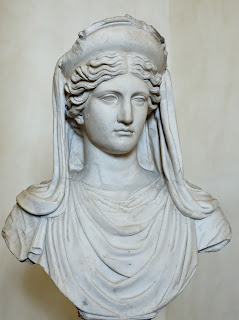 "Demeter"
King of the gods and ruler of Mount Olympus, Zeus was god of the sky, lightening, thunder, law, order and justice. Zeus was brother and husband of Hera although he had many lovers. Zeus's sister Demeter was goddess of the harvest, fertility, agriculture, nature and the seasons. She presided over grains and the fertility of the earth. Demeter was also one of  the lovers of Zeus and they had a daughter named Persephone.

Persephone was a beautiful, lovely and pure girl and the Olympian gods took to calling her Kore or Cora which means the maiden. Many gods fell in love with her and even offered marriage but her overprotective mother Demeter hid her away in the remote countryside far away from their eyes and she was appointed with companions to protect her. However there was one particular god that had his eye on the young girl.

Sweet Persephone liked nothing more than to be at one with nature and flora and fauna were her greatest joy. One glorious day Persephone became separated from her companions whilst gathering flowers, when all of a sudden she heard a thunderous sound, not from the sky but from beneath the ground under her feet. The earth started to shake and a hillside nearby split apart. Out of the opening came a great chariot. Before she had a chance to scream for her companions the driver picked the terrified girl up into the chariot and drove back through the opening in the hillside. By the time Persephone's companions became aware that she was missing, the opening had sealed with no sign or trace of what had happened.

Demeter became despaired at the sudden disappearance of her daughter and vowed that she would forever search for Persephone for eternity. 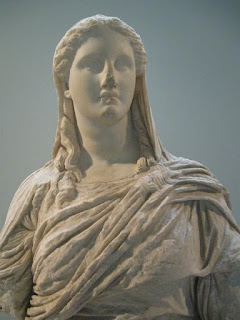 "Persephone"Demeter searched all corners of the earth a thousand times to no avail and as months passed she neglected her godly duties. The corn, harvests, the ripening of fruit and the sowing of crops were all abandoned and nothing germinated in the earth. No seeds grew, no buds opened, no shoots grew so the world became like a desert.

Whilst the gods were safe on Mount Olympus they could hear the cries and despair of the hungry people down on earth. One day whilst discussing Persephone's disappearance the sun Titan called Helios mentioned that he had seen everything that had happened, he was known to be slow in the wits. He exclaimed "The earth opened and Hades came out in his chariot and took her".

Zeus immediately went down to the underworld to bring his daughter home, but the King of the Underworld would not let her go declaring that now Persephone was his queen. After much brotherly debate Hades gave in but declared that he wanted one more day with Persephone and then Zeus could send someone to collect her. Zeus travelled happily back to Mount Olympus knowing that soon his daughter would be back home and Demeter would go back to her duties and that earth would become fertile once more.

Hades actually really did love Persephone and was sure that he could not let her go and he was certain that she showed signs of returned love. He went to her room and explained that Zeus had prevailed upon him to send her back into the world of light. He said he hoped that she did not think ill of him and asked her to share some pomegranate seeds to show that there was no ill feeling. Persephone took six seeds from him and enjoyed the sharp sweetness of the fruit.

Zeus sent the god Hermes down to the underworld to retrieve his daughter but when Hermes arrived Hades told him "Persephone has eaten fruit from my kingdom. It is ordained that all who have tasted the food of hell must return. She has tasted six pomegranate seeds so she must come back to me for six months of the year". 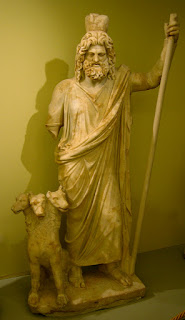 "Hades"
Hermes knowing that this was true took Persephone up out of the underworld and into the arms of Demeter. Immediately the world began to spring back into bloom again. It was a joy that was to last for half the length of the year and six months later in accordance with divine law Persephone would return to the underworld. Each time at her departure Demeter's sadness and loss would cause the trees to shed their leaves and a dull time would cover the world. After six months Persephone would emerge from Hades' domain and the world would bloom and flourish once more again.

And this is how the seasons came about, the autumn and winter of Demeter's grieving and the spring and summer of the joy at her daughters return.

So what does this have to do with Sicily you may be thinking?

Lake Pergusa was the site of Hades abduction of Persephone, located in the province of Enna. According to the myth the lake was used as the portal for which Persephone used to enter the underworld and emerge back to earth. The lake is known as the 'Gates of Hades' or the 'Gates of Hell'. The gates of hell are various places on the surface of the world that have acquired a legendary reputation for being entrances to the underworld. Often they are found in regions of unusual geological activity, particularly volcanic areas or sometimes lakes. 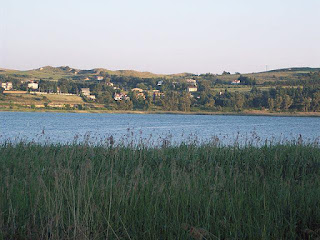 "Lake Pergusa"The lake is set between mountains 5 km from the hilltop town of Enna. It is a vital stop in the migratory journey of a great number of birds of many species. Today there is less mythological moments at the lake as it is now encircled by a old motor-racing track making it hard to view.

The cult of Demeter and Persephone was one of the most ancient on the island and was enthusiastically embraced in Sicily. In the Valley of the Temples in Agrigento there are various jumbled remains of what was once the walled sanctuary of the goddess and her daughter.

Pomegranates (Melograno in Italian) were first thought to have been  introduced to Sicily by the Arabs or Spanish way after the legend of Persephone's abduction. The fruit does not grow in abundance as many other fruits on the island but has found popularity in Sicily in recent years. Legend says that a pomegranate should have 365 seeds, one for each day of the year and it was once the symbol of Roman monarchs who ruled Sicily.

With seasons in mind Sicily is warm and sunny for nine months of the year making it an ideal destination for great temperatures and an abundance of sunshine, vital elements for a holiday. 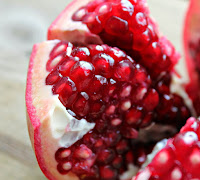 "The Pomegranate"Spring arrives early in March with the almond blossoms, it is also when the orange and lemon trees bloom. May and June are perfect if you want a warm temperature to enjoy the beaches with crystal clear waters and without the summer crowds. In July and August the temperature rises and so do the visitors, the island then boasts summer fruits such as strawberries, peaches, cherries and watermelons. September, October and November are pleasant months where you can enjoy grape harvesting in the wineries and go olive picking in the countryside enjoying temperatures of up to 26 degrees Celsius, making it possible to visit the beach and swim in the sea right into November. You can also enjoy the delicious autumn fruits like the apples and pears grown on the volcanic soil of Mount Etna. In Winter months, when Persephone returns to the underworld via Lake Pergusa, it is even possible to ski on Mount Etna.

If you loved this post then you will enjoy this one from my Blog archive:
"14 Reasons to visit Sicily Out of Season"http:///2016/09/14-reasons-to-visit-sicily-out-of-season.html 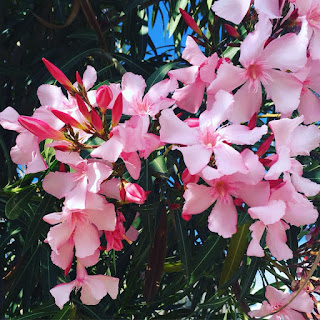 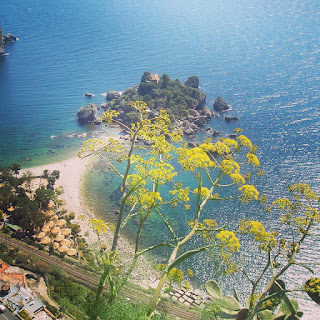 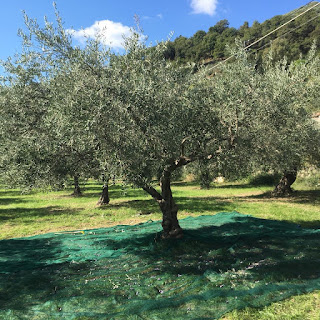 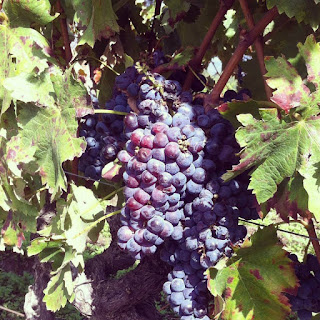 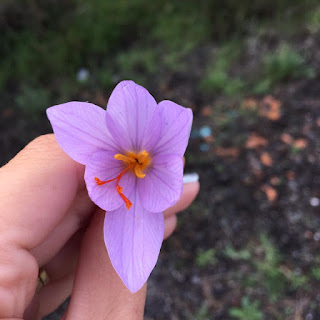 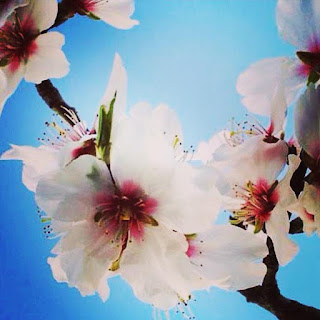 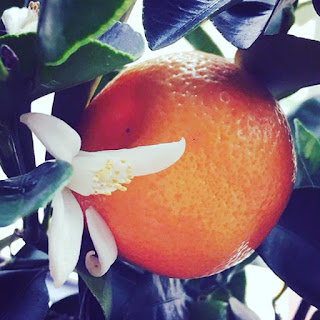 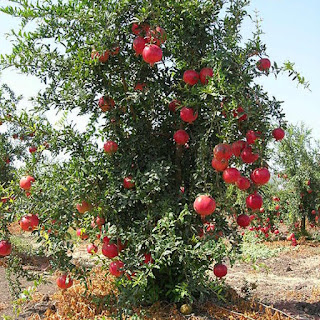 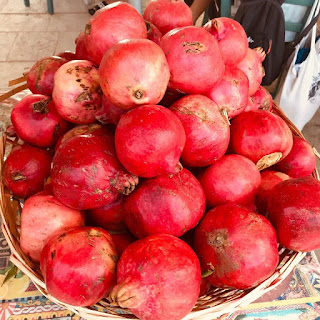 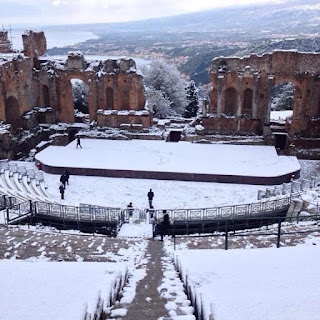 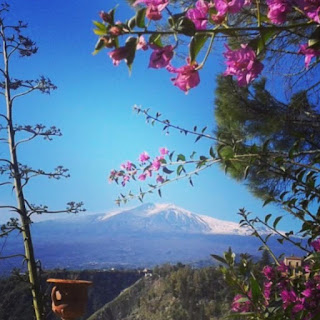 As featured in
"My Lemon Grove Summer"
by Jo Thomas

I am also a contributor to
www.timesofsicily.com
For NEW Blog updates and all things SicilianClick and Love my Facebook fan pagewww.facebook.com/whitealmondprivatesicily/
You can also follow me onTwitter www.twitter.com/sicilyconcierge/Instagram www.instagram.com/whitealmondsicily/Pinterest www.pinterest.co.uk/sarahjkearney/pinsLinkedIn www.linkedin.com/sarah-kearney560189a3/
For Trip Advice, Travel Tips and RecommendationsPlease feel free to Email me on;[email protected] 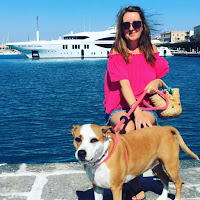