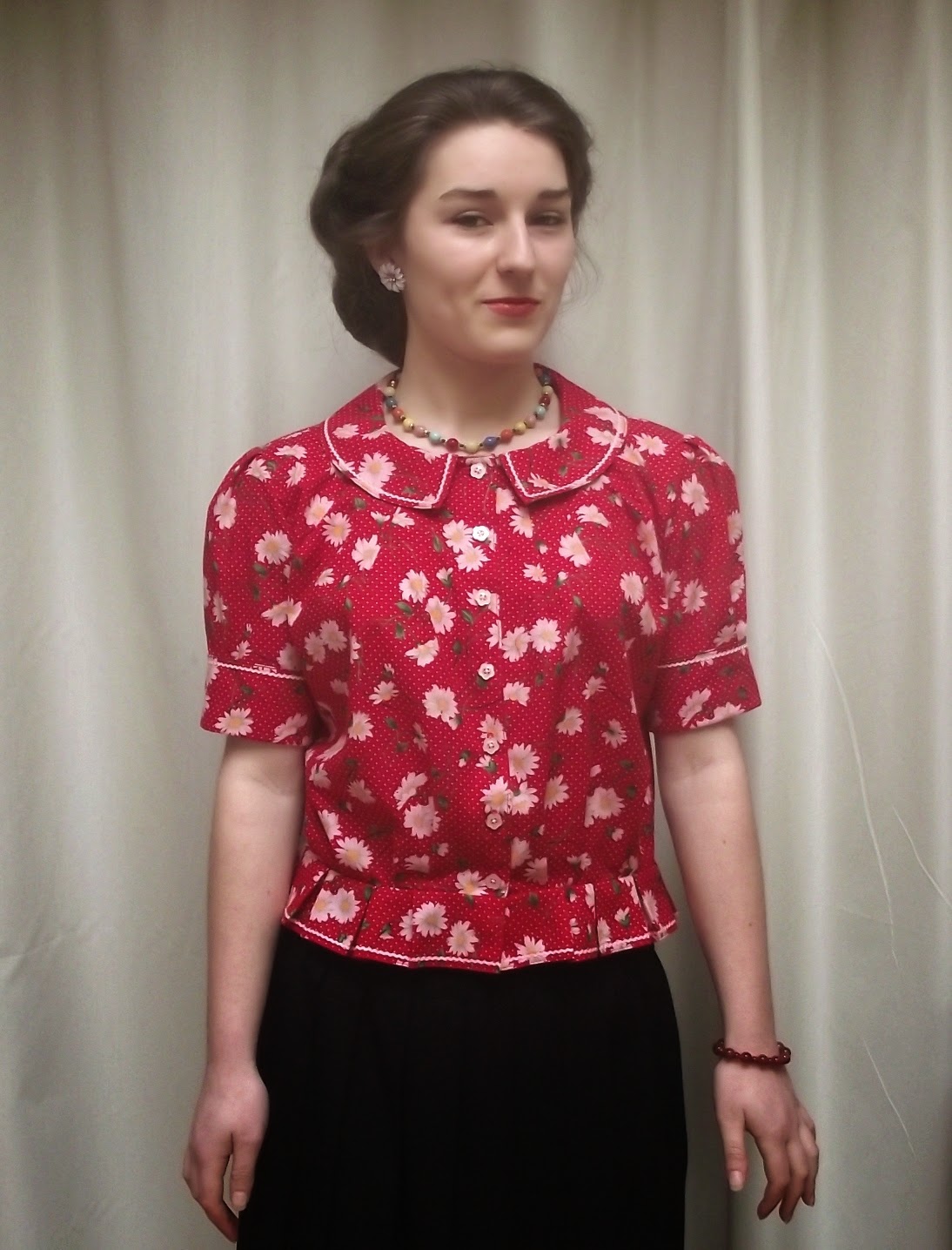 She looks fabulous (but I'm biased) and she's giving me the don't-think-I don't-know-what-you're-doing look I used to get from my mum.  In fact, with the thick dark hair and lashings of red lipstick she looked like her - just for a few seconds at a time.

As for the blouse, I'm thrilled with it.  Had it not been for the Sew for Victory challenge I wouldn't have made it so quickly, it would still be on the nebulous to do list between my ears.  But now, suddenly, after hours and hours of work, it is finished, and the end result doesn't look much like the pictures on the pattern. 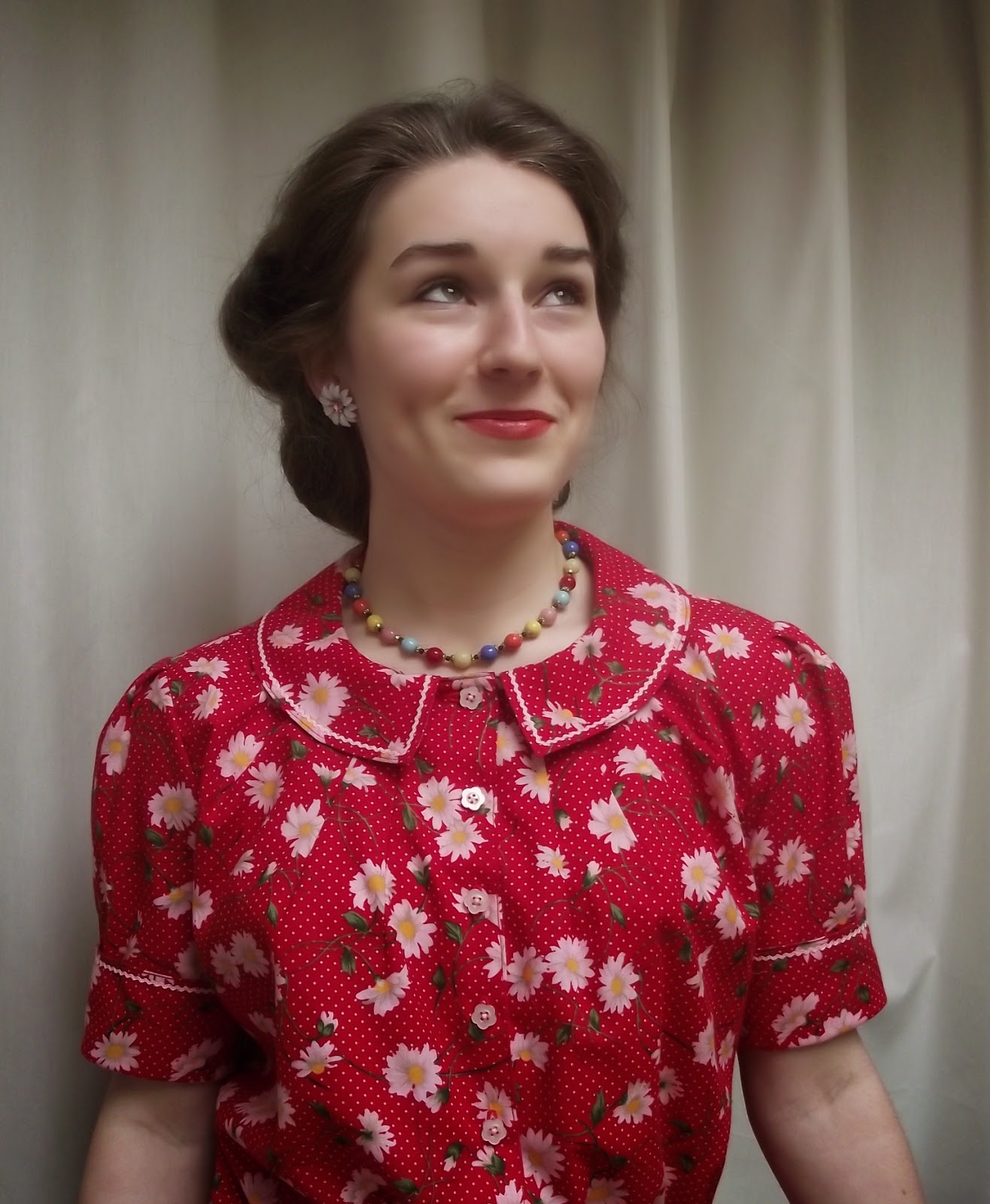 The first big change I made was to make it button down the front.  I was dying to try out the sunray darts, but I wasn't keen on doing a placket, and an undivided front with a high neck just doesn't suit me.  On the finished blouse you can't really see the lines of the darts because the material has such a busy pattern - however what you can see is how the darts make the front of the blouse fall in nice soft folds. 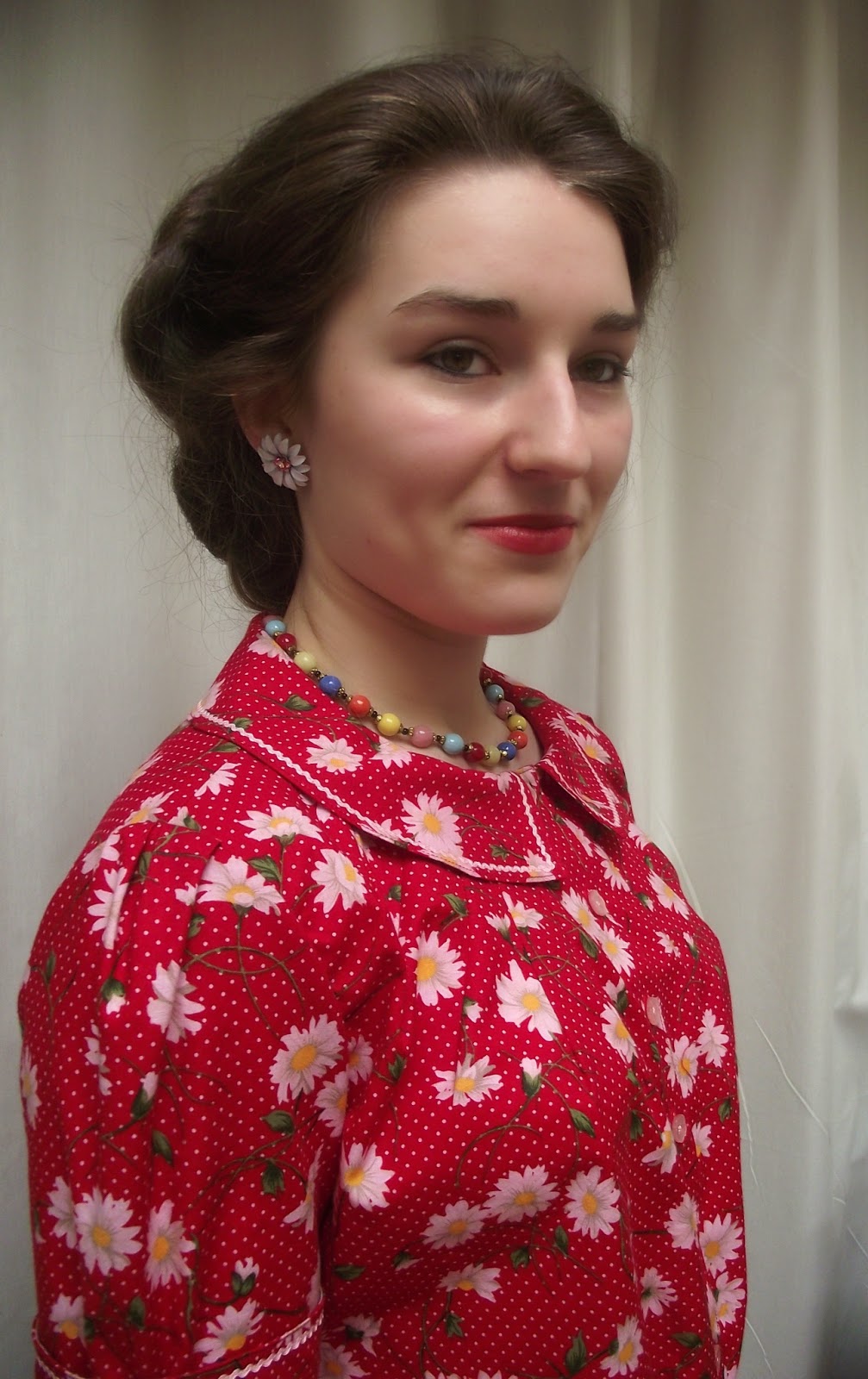 The pattern was for a 32 inch bust, so I had to scale it up a bit.  Not only did I have to widen the front and back, but also make the armholes deeper.  The original pattern was definitely cut for girls with arms and necks like broomsticks.  The neck came very high up to the throat, so I cut it lower front and back.  This meant that the original pattern piece for the collar wasn't going to work, so I drafted my own collar pattern.  The short string of vintage beads sat really nicely just above the neckline. 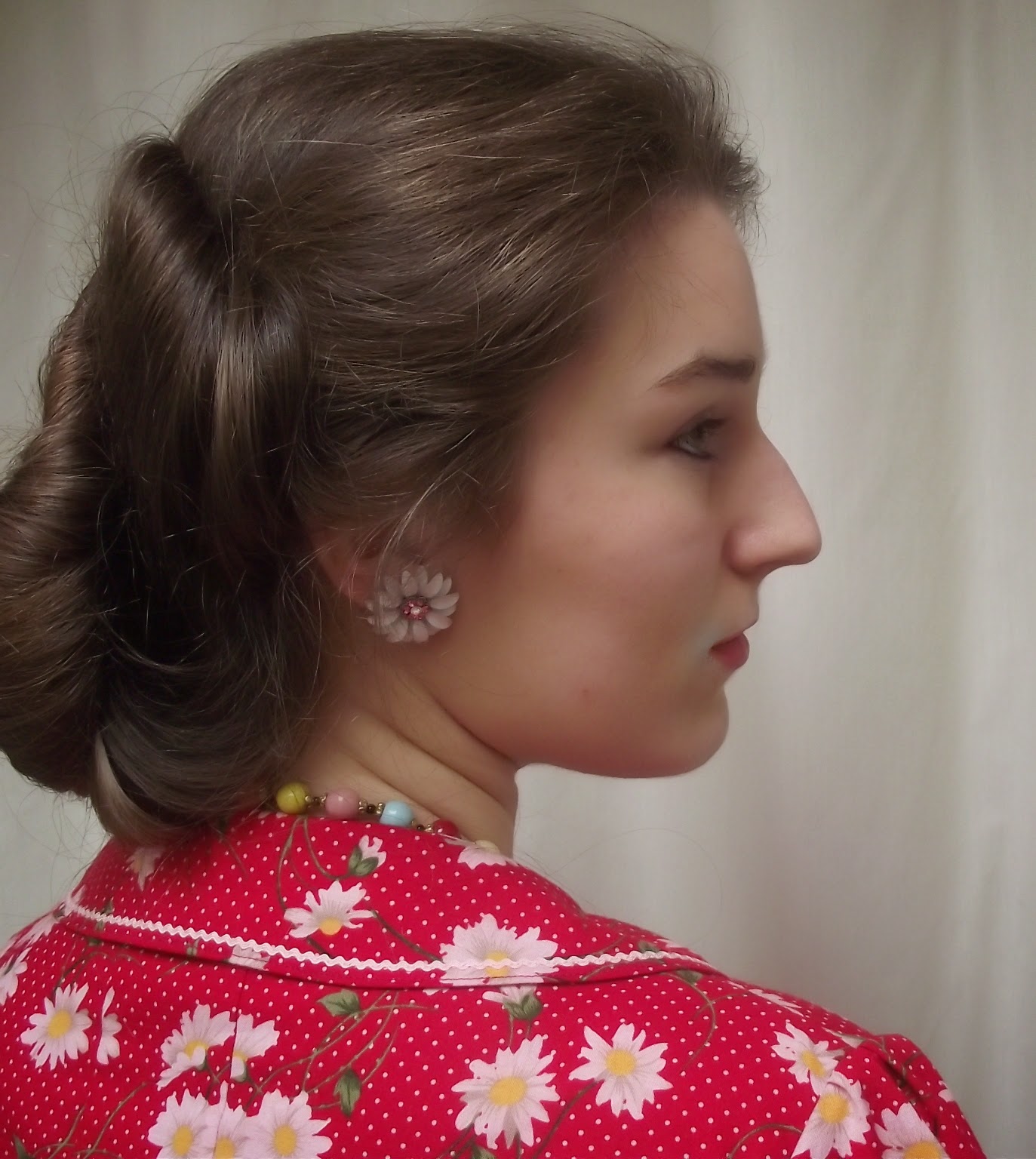 The scariest bit of all the alterations was cutting the blouse in half to widen the back.  I used a strip where the pattern matched, so it repeats itself down the middle.  This way the two extra seams don't look too conspicuous. 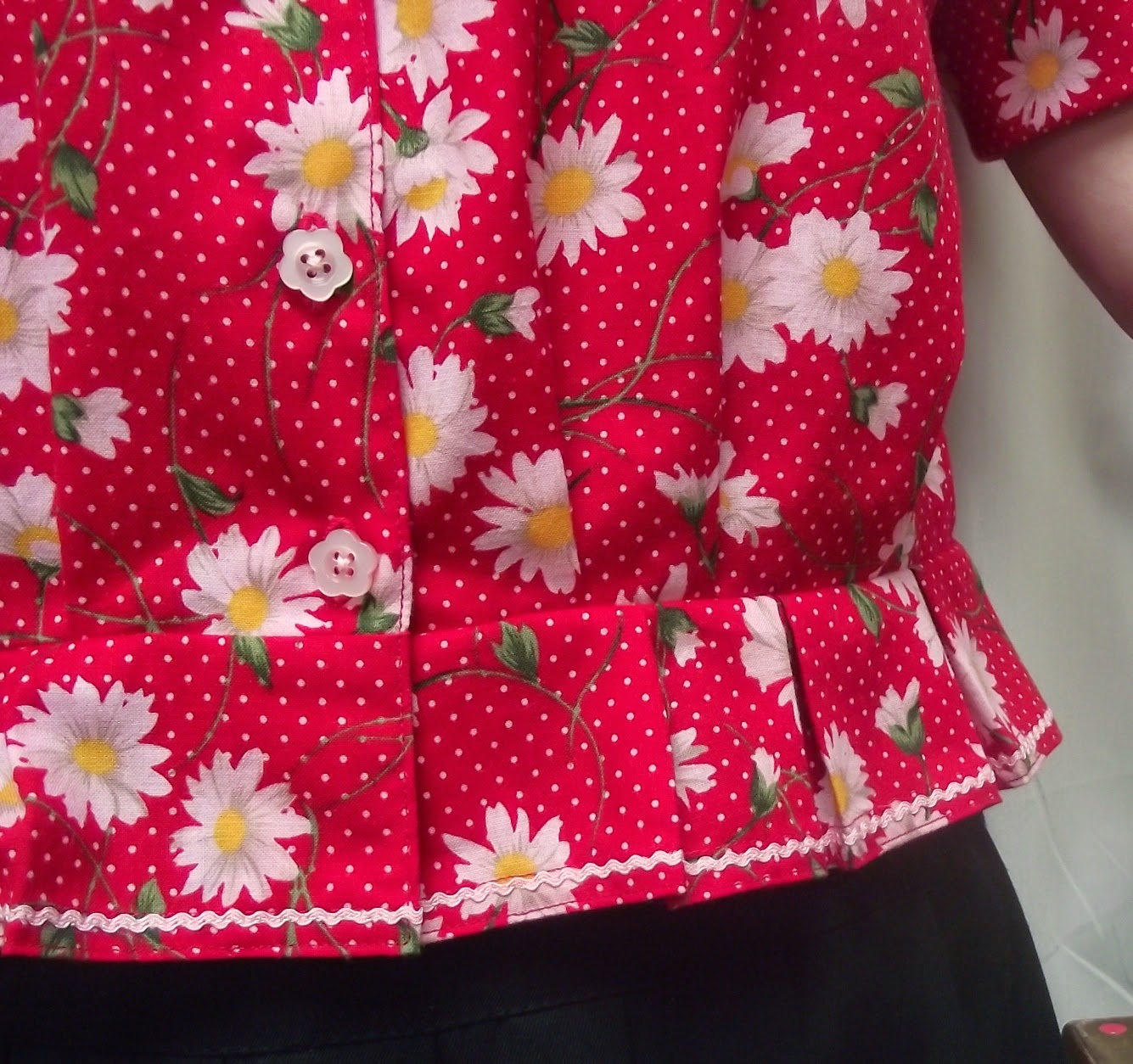 The original plan was to make a peplum.  After having to cut into the spare material to make the extra strip down the back, I didn't have enough left to cut circular pieces for a peplum, so I made a pleated frill instead.

I realise that I could have made a toile and planned and fitted in advance, but this cotton was only about £4 a metre, and I started late on the challenge, so I just bashed ahead with the intention of improvising as I went along. 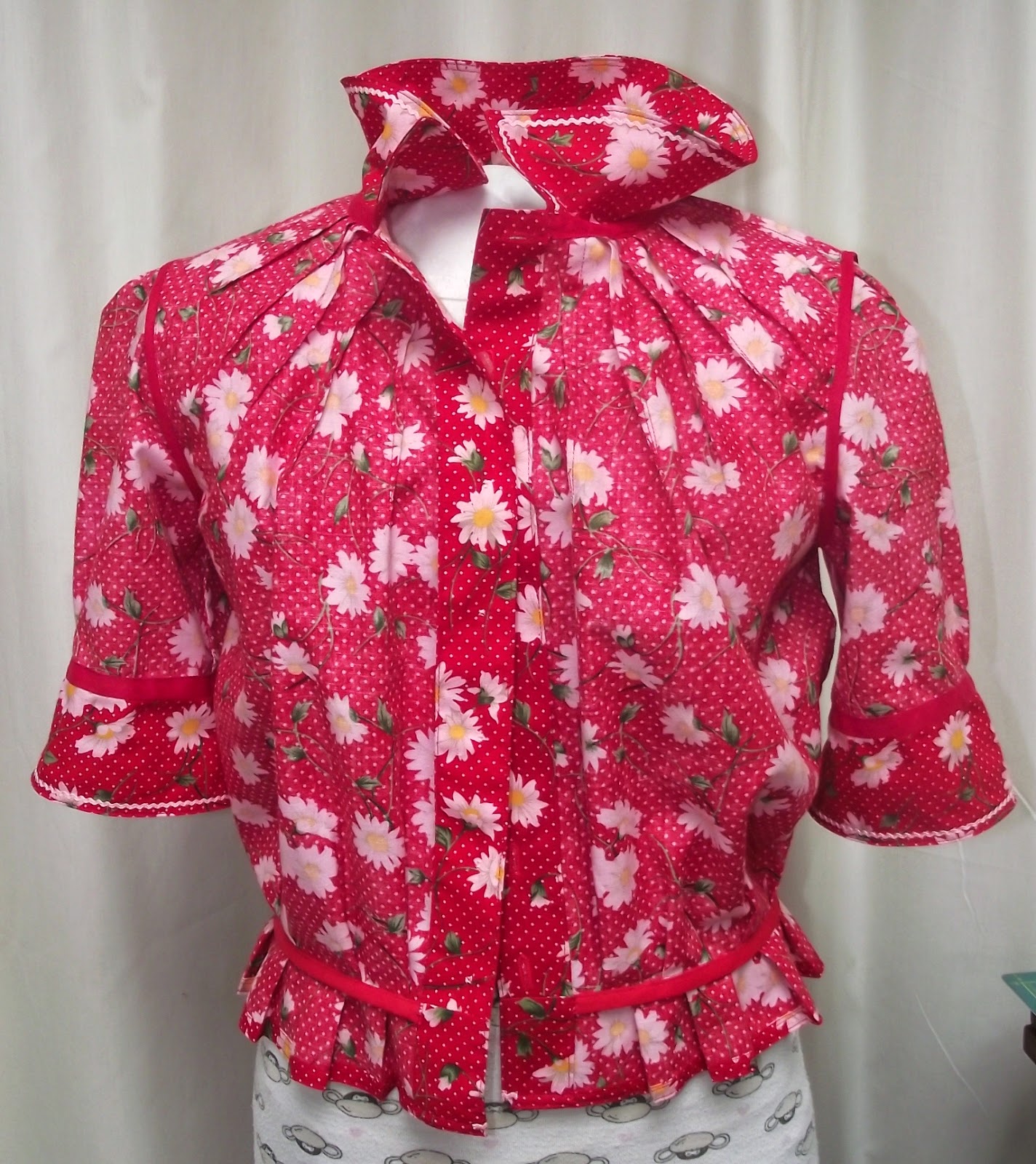 Now I'll show what you never see on the Great British Sewing Bee - the inside story!  Not a raw edge or a stray thread in sight.  French seams across the shoulders and down the sides - as well as the two extra surprise seams down the back - and all other seams bound with bias binding... 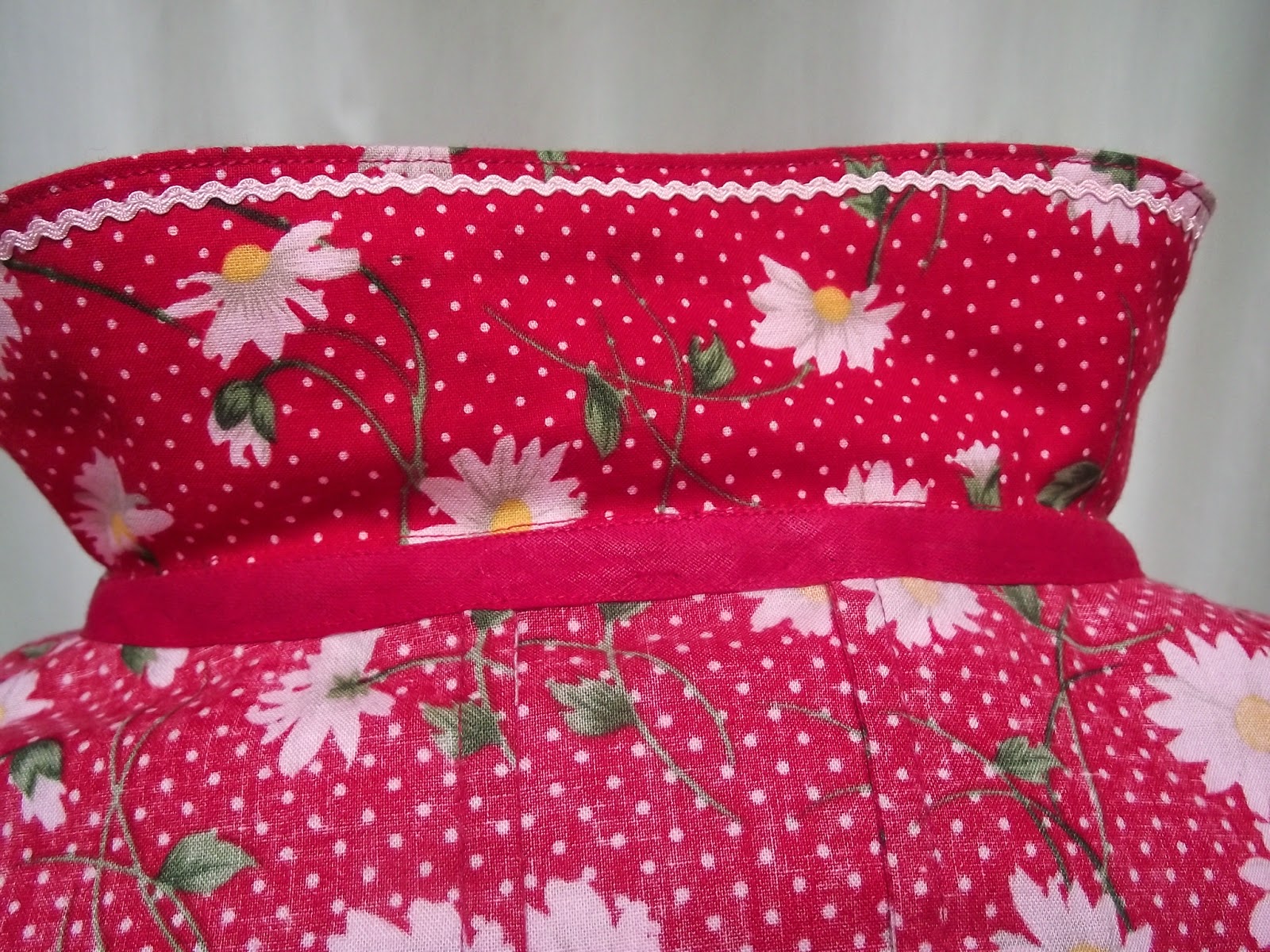 ...narrow binding inside the collar... 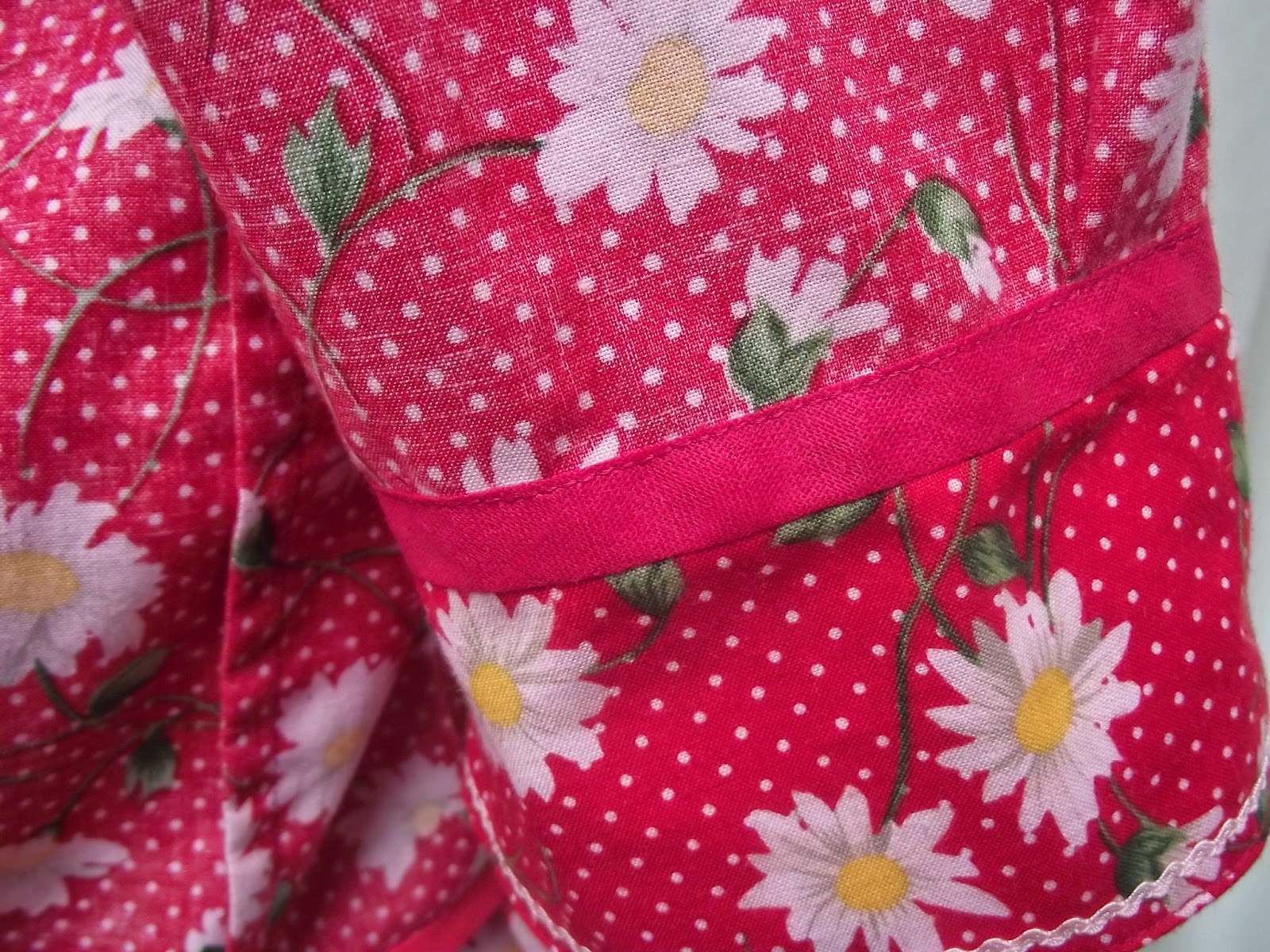 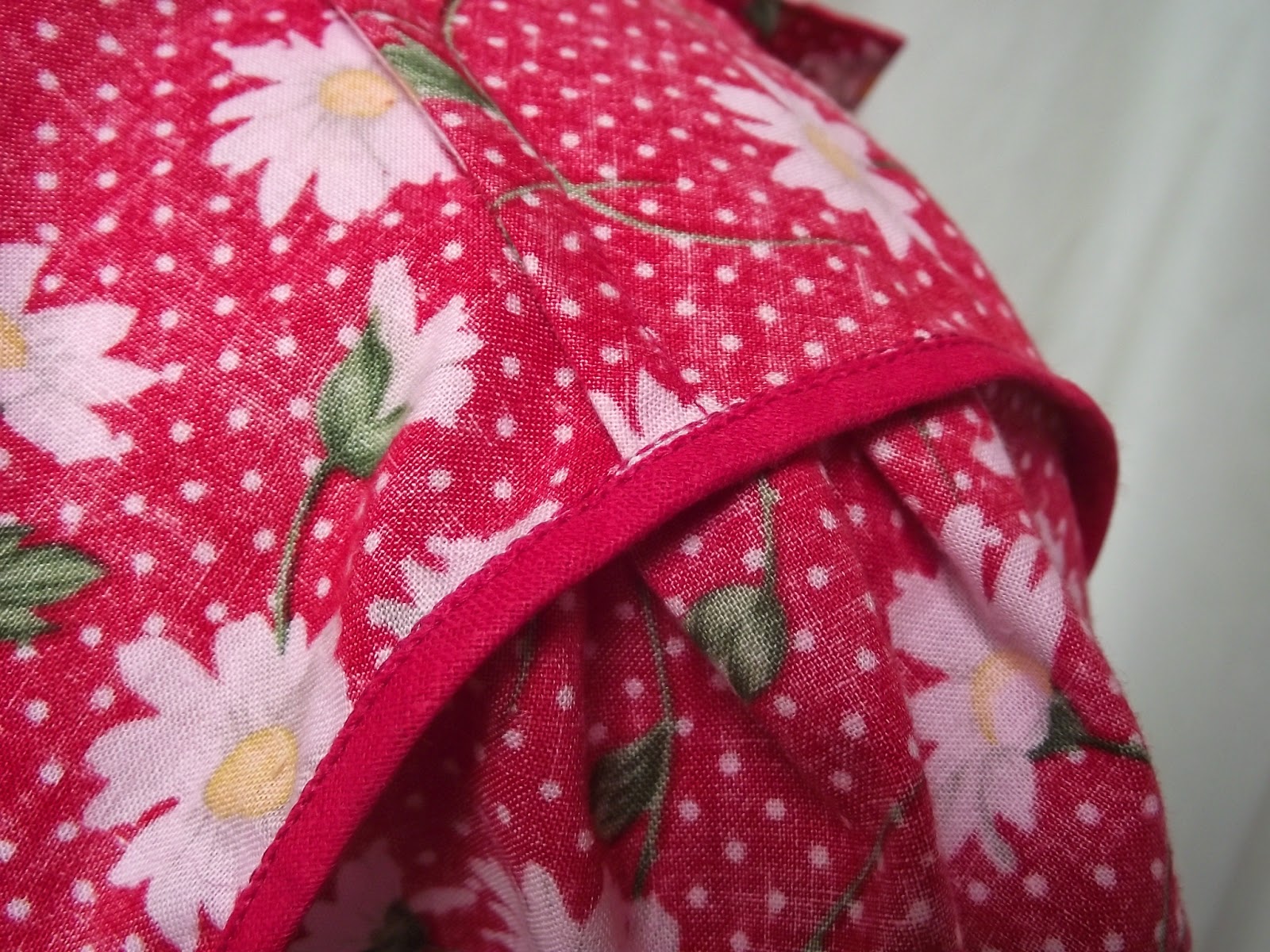 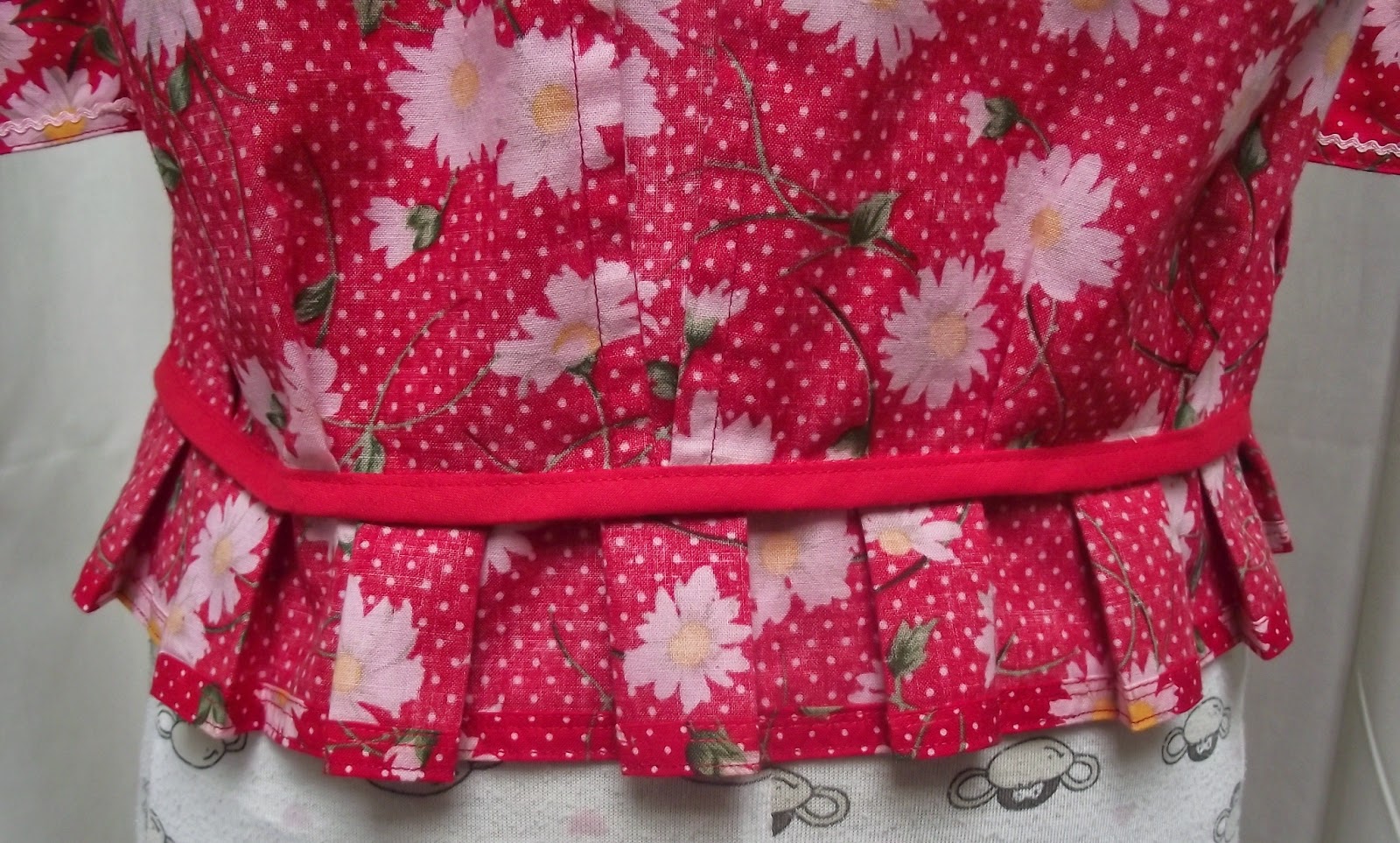 ... and wider binding for the seam attaching the frill.

The great 1940s star of this project has been the 1949 Singer 15K hand machine, which I used for all the machine sewing, except for the buttonholes... 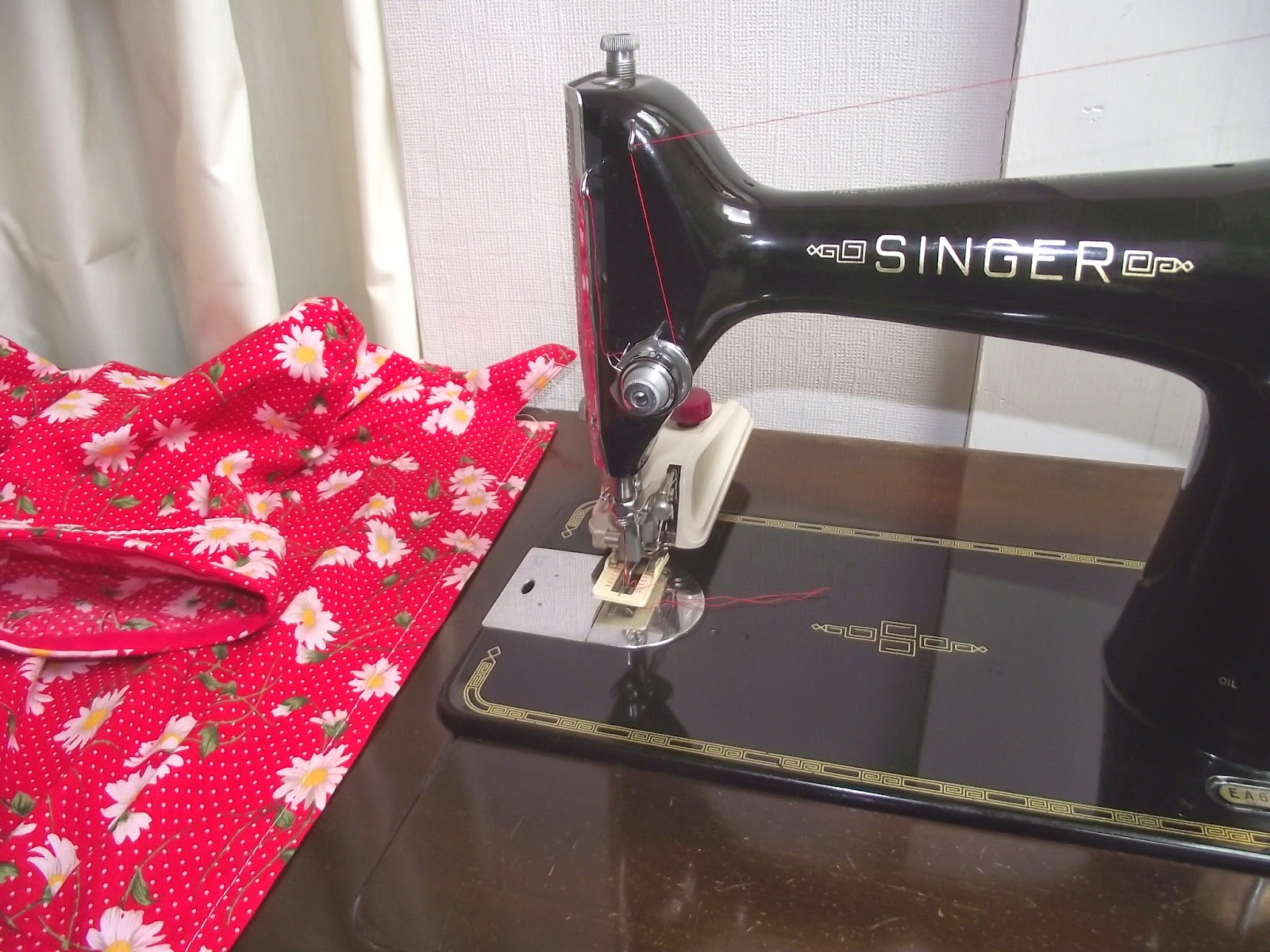 ... which I did yesterday using the buttonholer attachment on the 1936 Singer 201K treadle.

It has been an intense bit of sewing, and despite the fact my daughter looks wonderful in it, the blouse is mine!