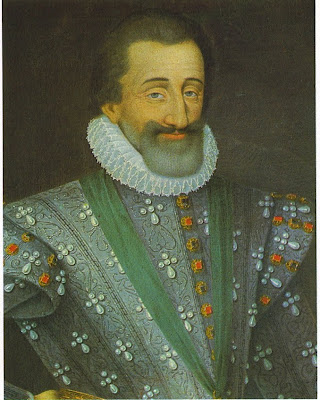 I Bet You did not Know the wave of emigration from Aragon in 1610. Today the Turks know a lot about Jewish immigration from Spain and very little about the fate of Mudejars [1] or the relationship between Henry IV [2] and the Ottoman Empire.

This was an emmigration largely of converted Muslims into France and to the Ottoman Empire. Henry the IV of Bearn [2] granted entry of 22,000 Mudejar's (Morisco's) from Aragon, charging 10 reales per person. Henry IV was no stranger to Mudejars and one of Segovia's best Mudejar coffered ceilings graced the San Antonio el Real monastery, the summer residence of Henry IV.

What is important to note is the routes they took to enter France. 12,000 Entered through the Somport Pass. Another 10,000 entered France via Roncesvalles-Saint Jean Pied du Port. Although many of these emigrants moved on and settled north of the Dordogne, many also settled in Bearn and the Pays Basque. There were many thousands more entering via the ports at Saint Jean de Luz and Bayonne, and much more illegal land migration over the Pyrenees.

[1]Mudejar (from Arabic mudajjan, “permitted to remain”), any of the Muslims who remained in Spain after the Reconquista, or Christian reconquest, of the Iberian Peninsula (11th–15th century). In return for the payment of a poll tax, the Mudejars—most of whom converted to Islam after the Arab invasion of Spain in the 8th century—were a protected minority, allowed to retain their own religion, language, and customs. With leaders assigned by the local Christian princes, they formed separate communities and quarters in larger towns, where they were subject to their own Muslim laws.

[2] Henry IV Prince of Béarn. Henry de Bourbon-Navarre was the son of Antoine de Bourbon, Duke de Vendôme, and Jeanne d’Albret, queen of Navarre from 1555. Henry, through his father, was in the sole legitimate line of descent from the Capetian kings of France. It was scarcely to be expected, however, that he would one day succeed to the throne of France, since Catherine de Médicis had already borne three sons to the reigning king, Henry II.

Around 1575, plans were made for a combined attack of Aragonese Moriscos and Huguenots from Béarn under Henri de Navarre against Spanish Aragon, in agreement with the king of Algiers and the Ottoman Empire, but the Ottoman fleet failed to arrive. After his crowning, Henry IV continued the policy of Franco-Ottoman alliance and received an embassy from Mehmed III in 1601. In 1604, a "Peace Treaty and Capitulation" was signed between Henry IV and the Ottoman Sultan Ahmet I, giving numerous advantages to France in the Ottoman Empire.