Happy New Year to all reader-friends! 2009 was a wonderful year for our family. I wanted to start the new year with a new web look but since I'm still in search of someone who can help me with that, you'll just have to bear with it. I still have some posts on my Guilin trip so I'll dispense that before moving on to recipes posts.

Day 4 of our Guilin trip was spent doing what every tourist does in Guilin: take a slow ride down the Li River. On my previous trip, I took the large boat from Guilin to Yangshuo, a boring 4 1/2 ride in which I had to put up with cigarette smoke and a very bad lunch. This time, instead of enjoying the river on a large boat filled with about 100 people, mostly locals, we took a raft (not made of bamboo but of PVC pipes...) from a town called Yangdi, about one hour by bus from Yangshuo. The raft ride cost about 100 Yuan/RM50/US$14 pax but the big commercial boat ride will set you back 400 Yuan pax. I definitely recommend the raft ride because you'll be closer to the water (in the large boat, you sit inside a cabin, coming out only at certain scenic points) and it is more serene and enjoyable than riding with nearly a hundred Chinese. The raft ride is only about 2 1/2 hours from Yangdi to Xingping, and from Xingping you take a 45-minute bus ride back to Yangshuo for a couple of Yuan. I didn't like that they made many stops along the river for us to buy snacks, eat lunch, take photos with comorants and all those touristy stuff. You can insist on not stopping, especially if all 4 of you on one raft are known to each other. 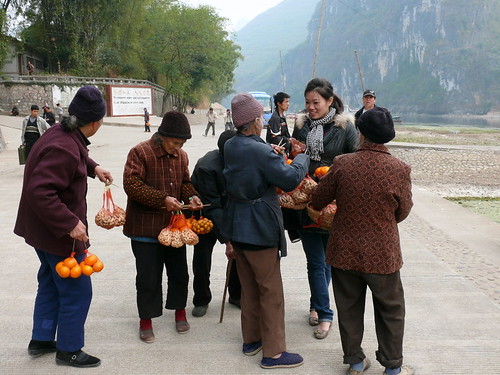 On arrival at the Li River in Yangdi for the raft ride, old ladies aggressively pushed mandarins, tangerines, peanuts and fresh flower tiaras for 2 Yuan/RM1/US$0.30. They followed us everywhere, telling us to pity grandmothers. It worked. 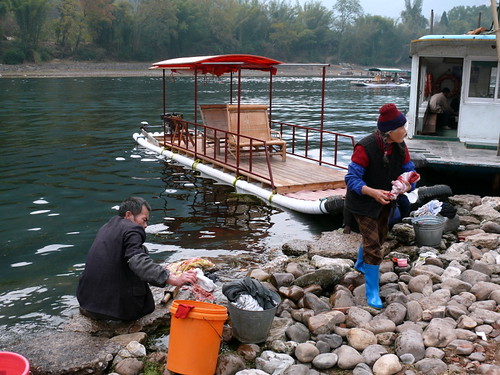 They still wash their clothes in the river. You'd think that the authorities would stop that. 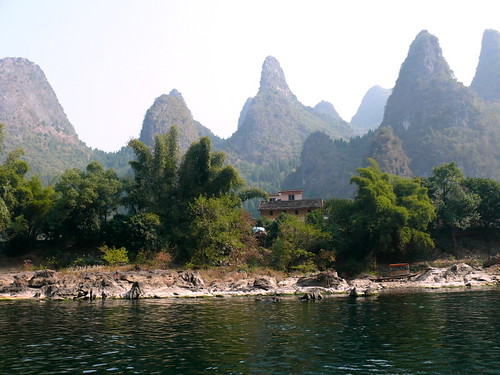 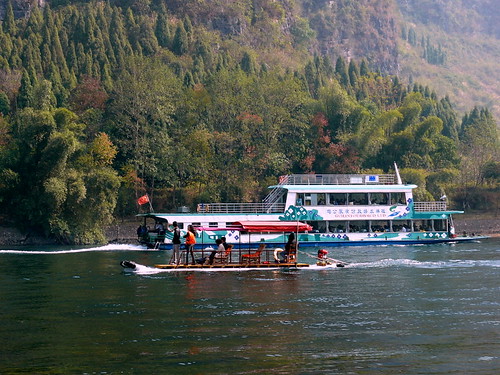 The raft can carry four people excluding the raft man but the big cruise boat carries about a hundred people. Three years ago I saw kitchen staff (lunch is served on the boat) throw cooking liquids into the river (liquid being harder to detect than solid rubbish) and on this trip, I was disappointed that it was still being done. The Li River and the hills along it are Guilin's biggest toursit draw, yet the authorities do nothing to protect the river. I would love to see the large boats banned. 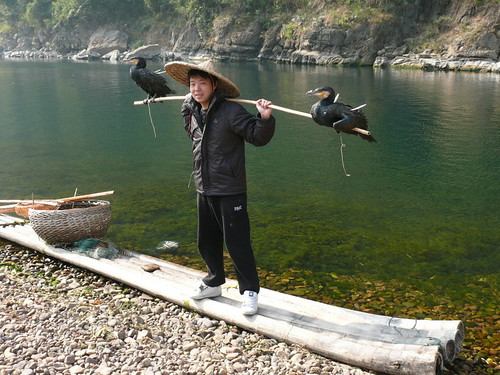 Taking a photo with these comorants will cost you 20 Yuan/RM10/US$3. 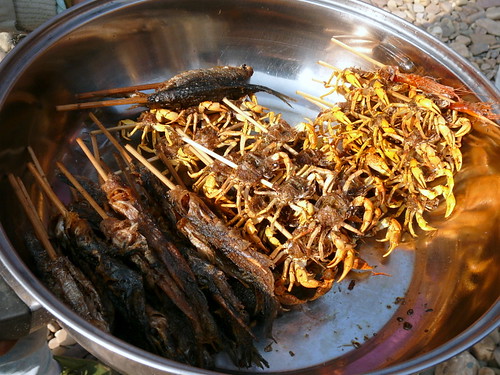 For 2 Yuan/RM1/US$0.30 , you can buy a stick of Li River crabs, shrimps and fish that taste like what they are--crustacean shells fried in oil. 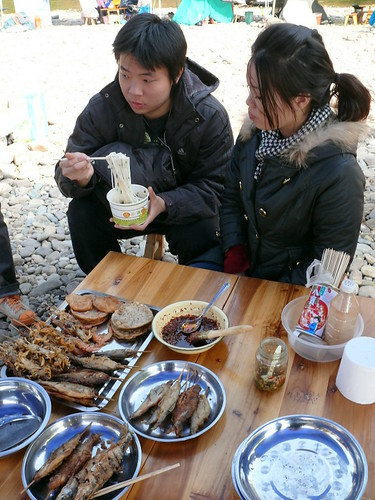 At 5 Yuan/RM2.50/US$0.70, the price of the Guilin mifen is twice that in the city. My kids found the river ride boring and preferred to get off the boat at every chance. 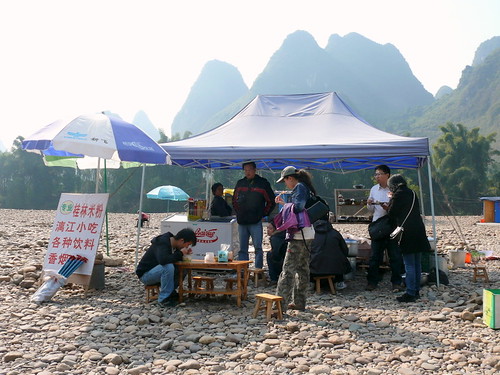 Makeshift tents that serve simple snacks and sell handicrafts such as carved river stones are everywhere, to my disappointment. Three years ago, there were hardly any. Again I felt that the ride on the Li River is over-rated especially now that it's so commercialized. 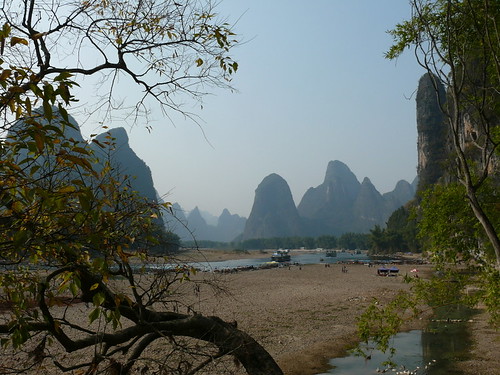 This is the end of the ride, near Xingping. The scenery of the hills at this point is captured on the 20 Yuan bill and you should get your 20 Yuan bill ready before arrival at Xingping, so that you can take the customary photo holding the bill against the scenery.

December to March is probably the worst time to see the Li River because the water level is so low it becomes a trickle of water barely enough for the boats to pass through at certain points. Although the hills of Guilin are still ethereal-looking and beautiful, the lack of water in the river muted the beauty, like a girl behind a veil. I can imagine how beautiful the above scenery would be if the river filled its banks.

Xingping is a small town with nothing much to see, but there is a quaint old street. 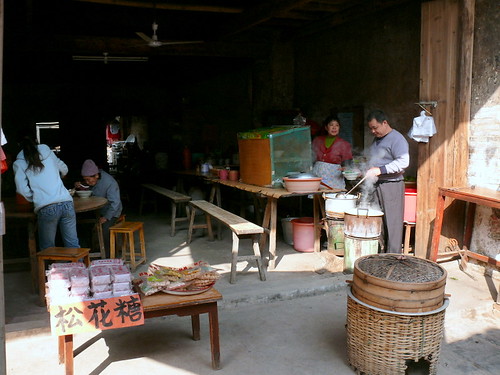 This is where we had one of the best Guilin mifen. We had Guilin mifen every day while we were in Guilin, sometimes more than once a day! One reason was because they don't serve noodles any other way. 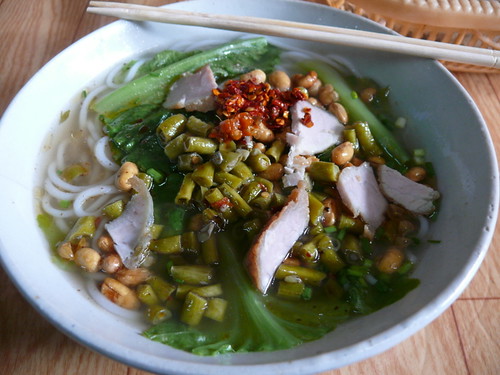 Looks simple but it's super yummy! The pork bones soup is rich and tasty, the pickled long beans sour and crunchy, the fried soya beans fun to eat and the Guilin chili just makes the whole bowl of noodles delicious and thrilling to eat. But most of all, the noodles were smooth and full of rice flavor. 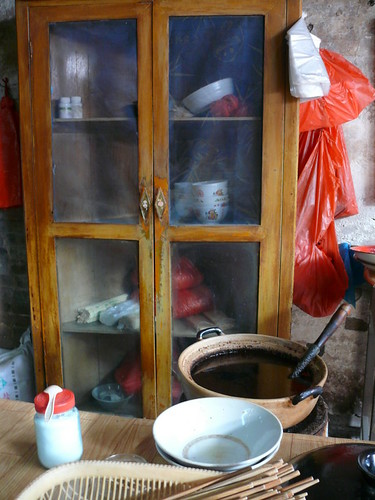 The large claypot held the lu sui, a gravy for Guilin mifen made of cinnamon, soy sauces and many other secret ingredients. The cupboard at the back reminds me of childhood days before fridges were available and leftover food was stored to keep them from flies. 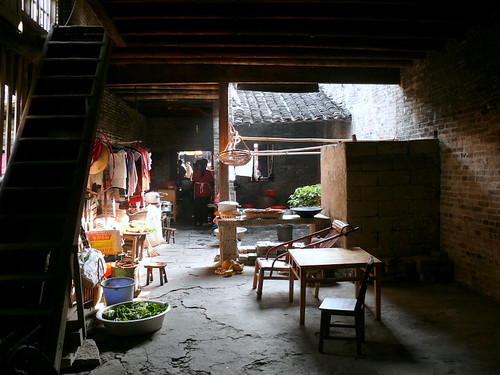 The back of the restaurant. It amazes me that these places still exist. It's like a hundred years ago. I hope it doesn't change. 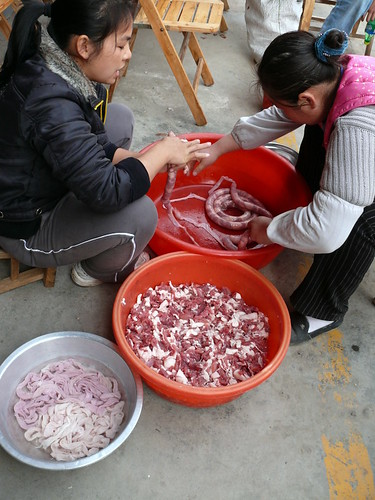 Ladies making sausages. The sausages in China are different in taste and shape from those we get here and in Hong Kong. They are thicker, fresher, more subtle in flavor and not as hard. 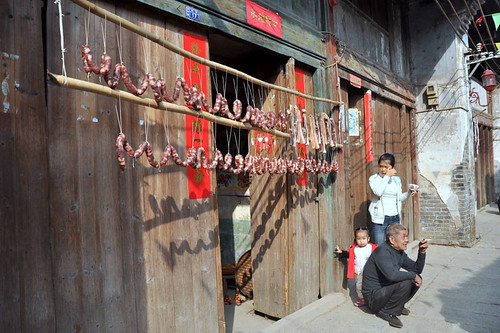 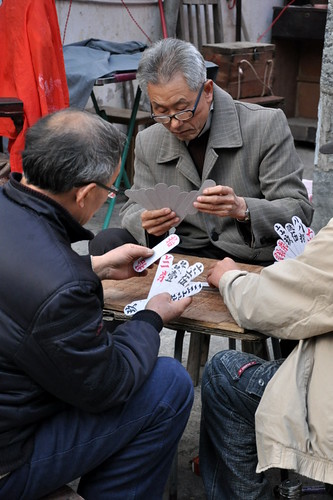