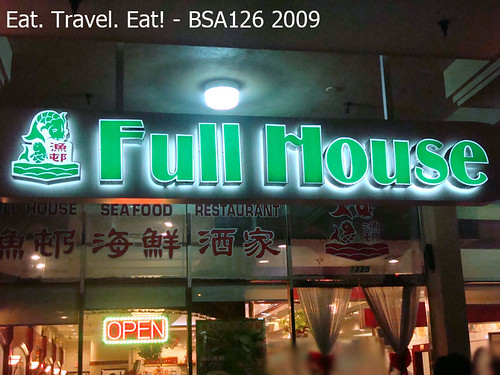 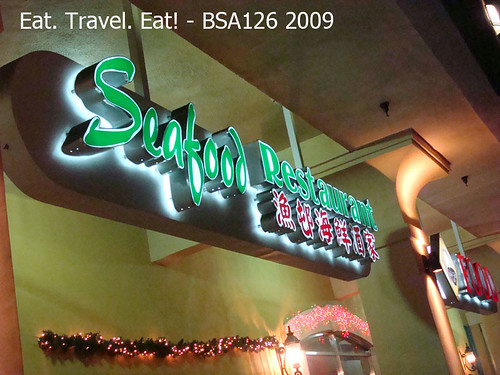 Exterior Signage
It's one of the two dim sum places in Arcadia, but this one seems busier. Why? Location? Hey, it has a C (!!!!!!!) from the Health Department, but we haven't been here for a while. Especially dinner. We see friends here tonight, but after all it is New Year's Eve, which many people should be outside celebrating. We find here though not full at all. And so, we eat here.

We have had great experiences with their dim sum; it is flavorful, served in big portions, and costs less than if you ate in San Gabriel or that part of the SGV. Definitely a recommended dim sum place- and the water chestnut cake, XO rice noodle roll, char-siu bao, and taro buns are to us the best items there. But how about dinner?

Everyone knows about the 9.99 peking duck (outside of the store has an ad on it), but how are the other items? We know the peking duck is delectable, but what else is too?

And so, let's get started. Some interior shots first (so you know what you are getting into- my Tripadvisor review has some other ones too which are not here- the vertical ones and the ones with people): 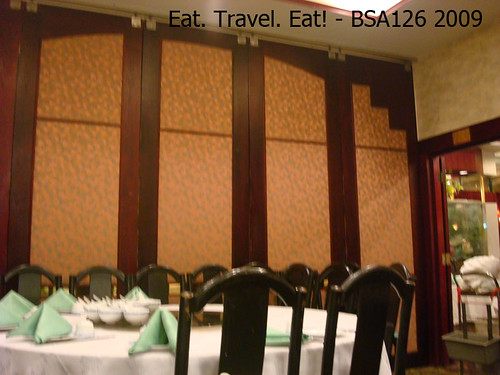 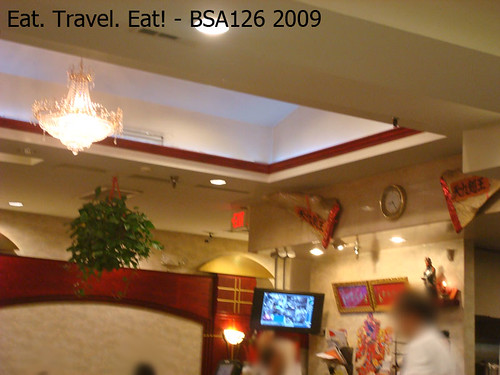 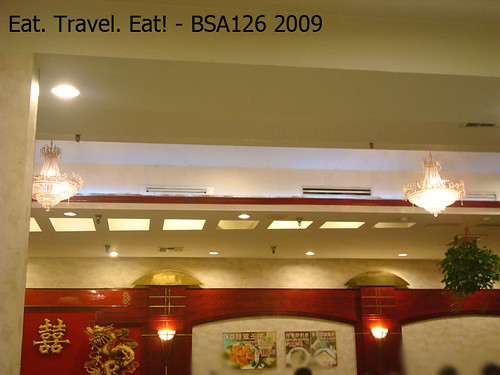 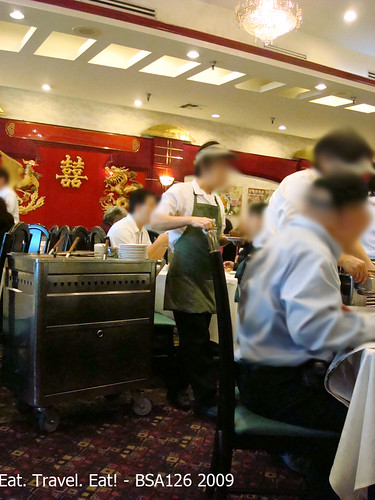 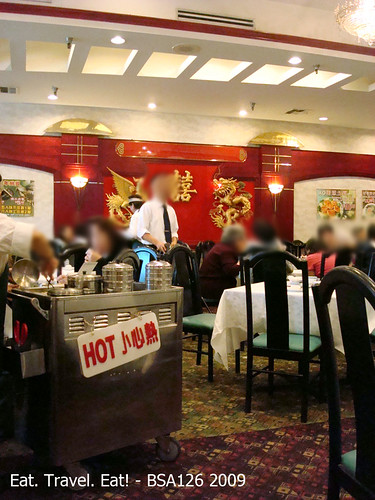 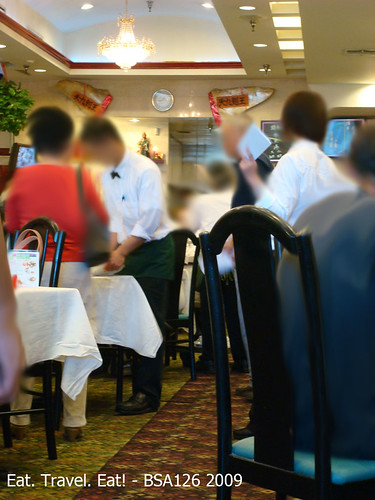 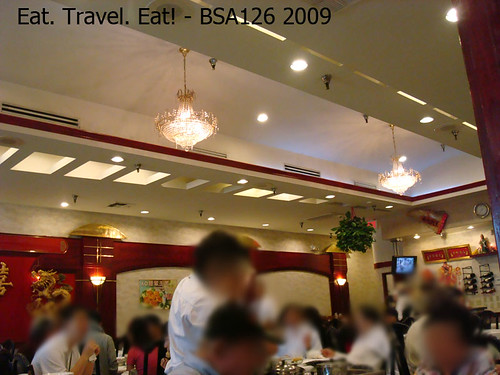 Looking at the menu there are many many choices to choose from. I just want Peking Duck which is a must order. However, on New Year's eve, it is 18.99. Not a bad deal, but hey! This costs double tonight? I'll wait for next time. Thanks!

Our server....I'll just say he was a little...not honest. The pricing he gave out was WAY wrong (causing us to pay much more for the meal), and what he stated about the item was not true. We were going to order fish tonight, as it was New Years Eve. But the choice available was red snapper. And from past experience- we know restaurants simply cook that dish wrong. It comes out overcooked and mushy. We end up with this: "Fresh Deep water fish" cooked in many ways: 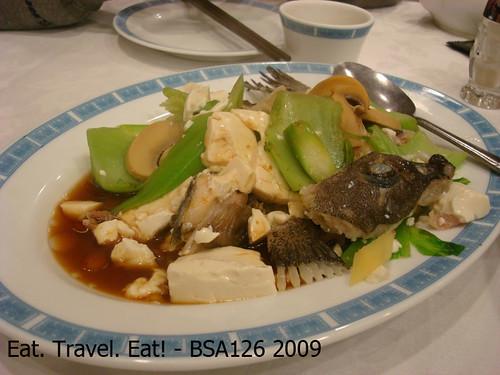 "Tong Zha"- Stuff from the soup 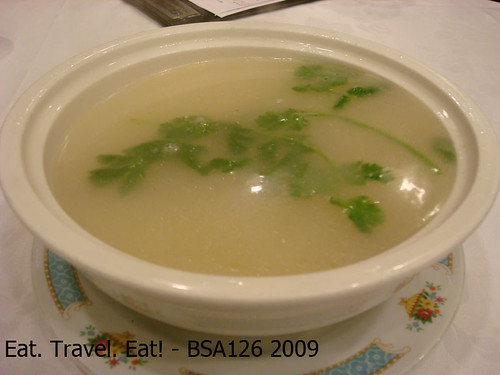 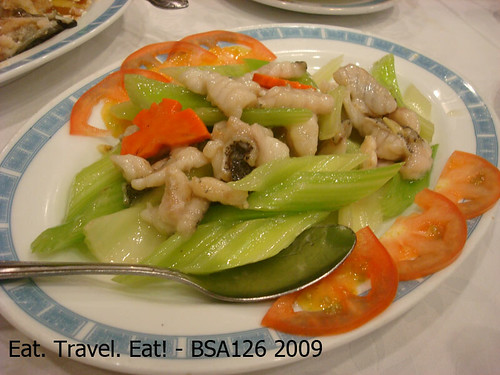 The Stir Fry Portion
They said this would not cost a lot, but it ended up being a grand total of: $30. Not a really good deal per se. The fish was not fresh- you could taste it! It didn't have that hot feeling; instead it tasted cold inside as well as again, mushy. Disappointing in general. However, one party member noticed this fish used to be frozen! Due to the fact they were rushing to cook the food, they didn't defrost everything, and the fish head still had the freezer burn in it. And when it came to our table, you could taste that as well as the ice. So, our party member got the server and told the story; they said it was fresh, but we got back at them. They could feel it, and I think they did feel like we had caught on their marketing scheme. No matter what, do not order this! Fish soup though was good. It was slightly sweet which is what results from fresh fish and good cooking; no fishiness in this soup. However the real fish didn't taste fresh at all. Celery was cooked to a crisp and was crunchy. 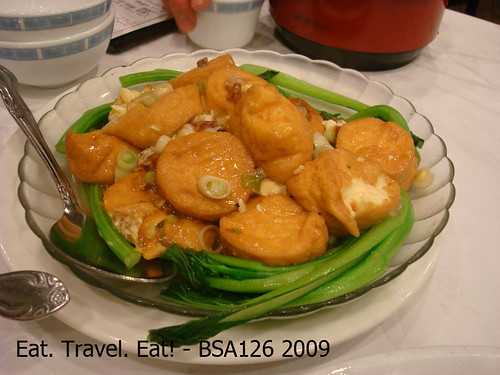 Tofu with Sausage
This though, in comparison to the other dish, is a GREAT dish and must be ordered if you like this type of food. The tofu is the egg tofu, and it is NOT crisp, although it is fried (they cook the tofu and the sauce together evidently, which is why so). Obviously, being egg tofu, it is very soft and has a great flavor which is different than regular tofu. Sausage is flavorful, and with rice it is good! 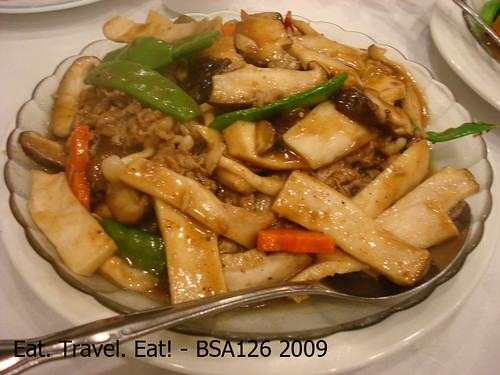 "Fat: Beef in Satay Sauce: I didn't try this much, but it was very flavorful with the satay sauce and the veggies were fresh and crisp. 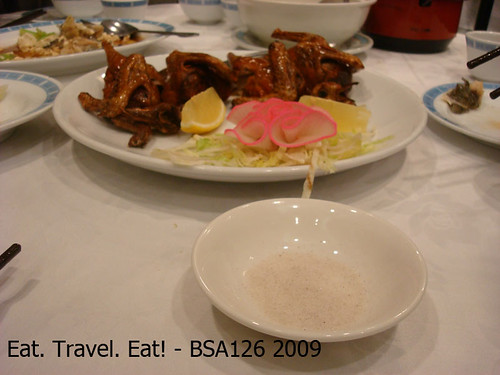 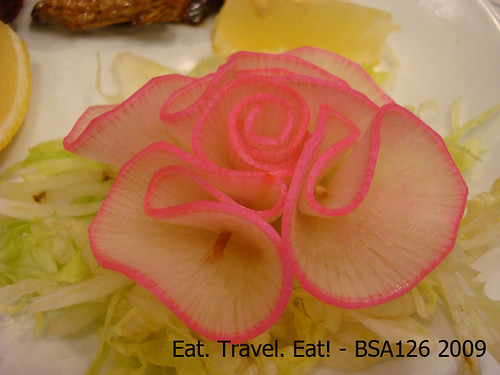 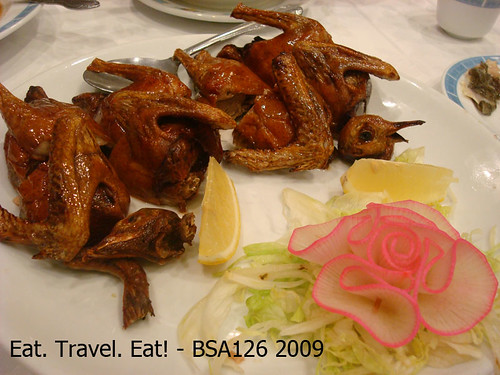 Closeup- Dish
The server said this would be 7 dollars for one- so this case this would be 14. However, the bill said...23. Why? Why? Why? No response.
The squab though in general was great. Crispy outer layer, and very warm and juicy in the inside. Squab meat was not dry at all, and the pepper salt gave the squab more flavor- you will taste the meat flavor better as long you don't add too much. 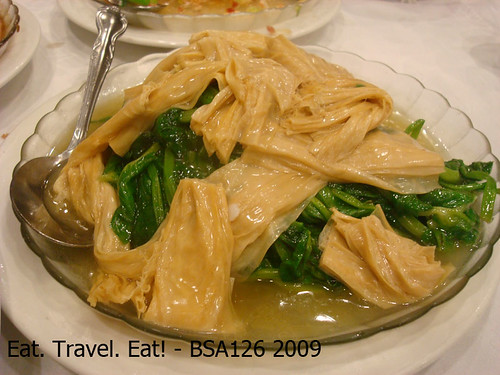 Pea Sprouts with "Fu Pae" or Dried Bean Curd Sheets
Nothing special, but the pea sprouts are crisp, and the "Fu Pae" is mixed with a starch sauce and put on top. No big flavors here, but good side to eat along. We like pea sprouts and this was cooked crisp, not to lumpy and overcooked. 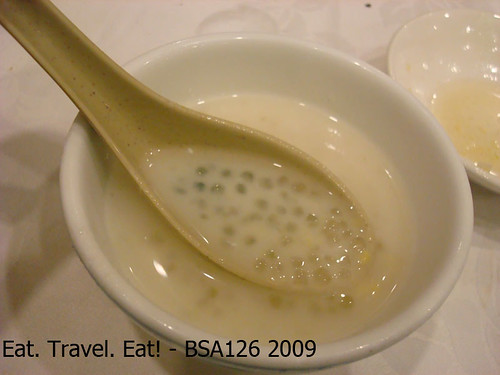 Complimentary Tapioca Coconut soup
Lots of tapioca in this. Rarely see restaurants give this out anymore- now most restaurants just give out red bean soup or oranges. And so, this was a great change! The server gave us an extra bowl for every person too, because he saw that I and another party member really liked it. But in reality, I think it was that it was to make our entire party happier after the fish incident.

Creamy and the bits of bean added some texture along with the smooth tapioca.
---
I don't think we'll come back for dinner again after this round of a so-so meal, especially the fish which had no really great flavor coming from it, which meant it wasn't fresh. The other items were okay, but not memorable. Overall, the quality for dinner, especially for some of this meal's items, have gone down. I'll definitely recommend this place for dim sum, which many people flock here to have, but not for dinner!