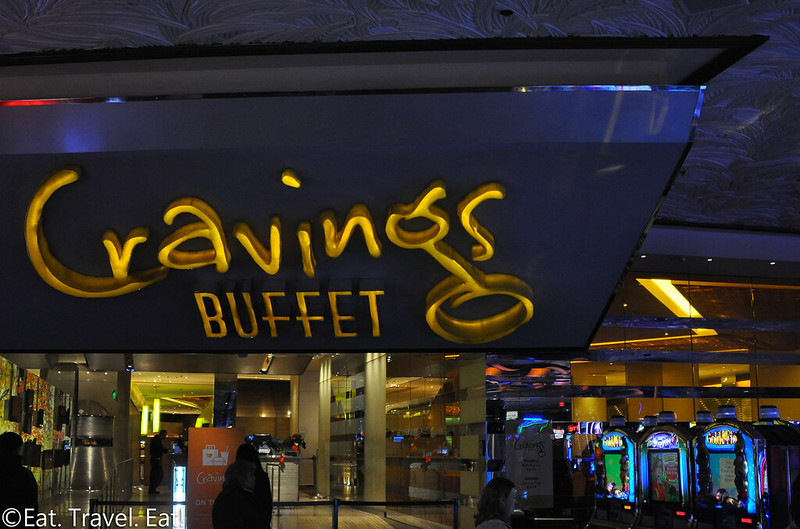 We happened to visit Las Vegas recently to update ourselves in all the changes that have been made over the recent years. After arriving at The Mirage and completing our check-in process, we headed for dinner, only to find limited choices, for many of the fine fining establishments were closed. So, we looked to the Cravings Buffet, a place we had visited five years ago.

What's changed so far with Cravings? Many Las Vegas hotel dining establishments (including Cravings) now have electronic touchscreen monitors featuring information about the restaurant, as well as menus, at the entrance. With enticing items like osso buco, eel and tuna nigiri, and brown butter salmon, we went into the queue. (Unfortunately, as we would find out later in the meal, the digital menu isn't 100% accurate) 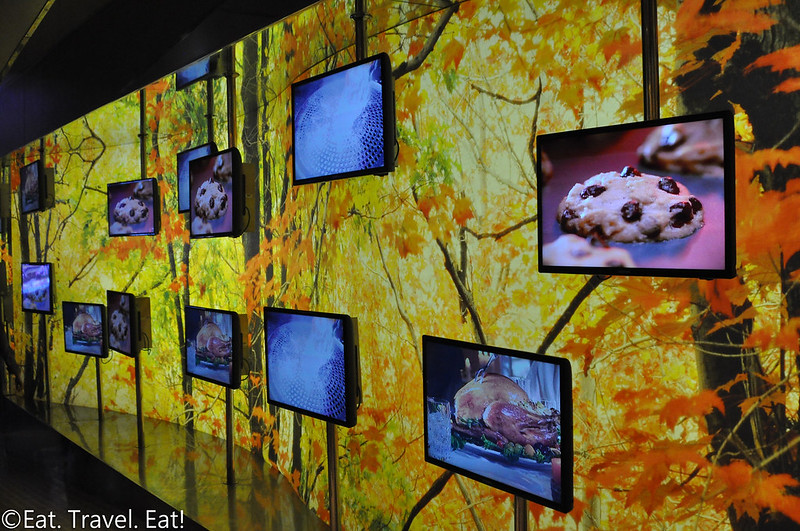 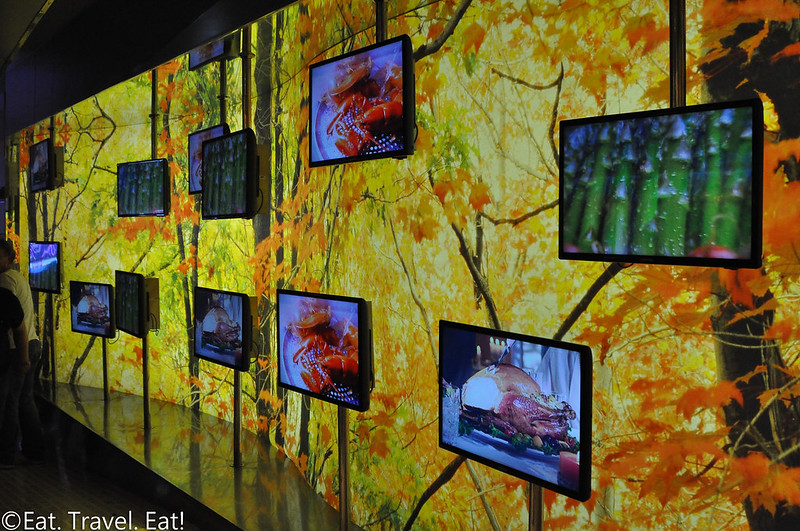 Though we did happen to have VIP access to the line, the regular line happened to be shorter, being 8PM when we visited. Yet, even with the shorter lines, it still took ten minutes until we were able to pay the entrance price--28.99 USD per person--to get in. Not a big price increase, and in the mid range in terms of buffet pricing. In contrast, the Cosmopolitan's Wicked Spoon and Caesars Palace's Bacchanal Buffets are closer to 50 USD a person--upping the previous premium buffets (Wynn and Bellagio) by a whole 10-15 USD. Surprise, surprise!

(taken at past closing time--approx 9:30pm, when they start to clean up the food)
While we were nicely brought into the restaurant with enthusiasm, the person who took charge of our table had quite the attitude. Asking us how many people we had in our party, he threw the respective number of straws onto the table, as if we owed him a favor.

As for beverages, our orange juices were from concentrate, while hot water was provided in a large pot. Requested honey and lemon (to go with the hot water) were quite plentiful. 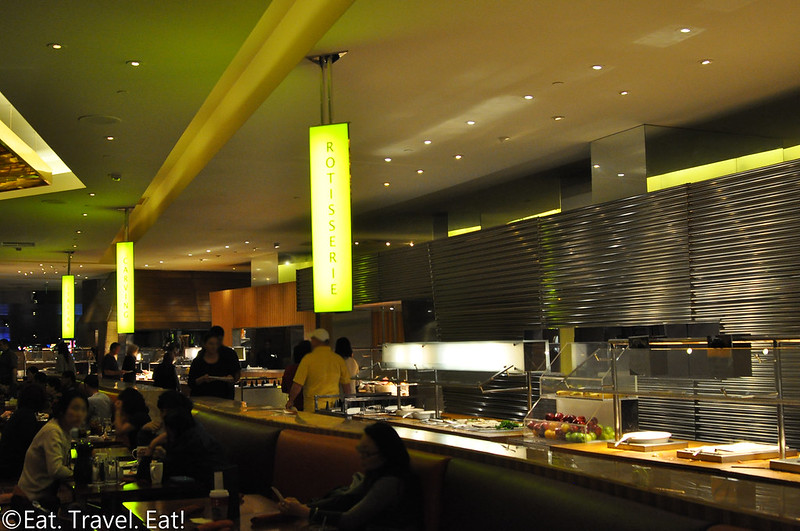 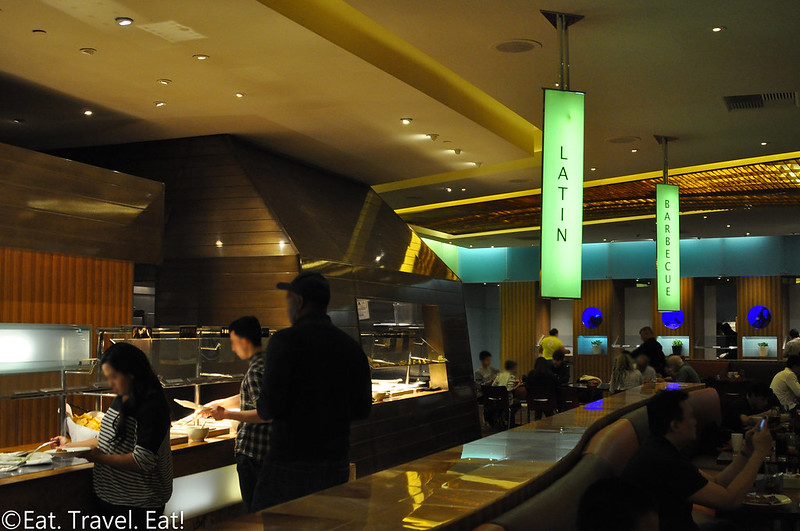 Interiorwise, not much has really changed. There are still the same food sections--like rotisserie, latin, italian, carving, raw bar, noodles, asian, salad, deli, and dessert--with some slight presentation differences. The clientele, on the other hand, now sport smartphones while eating/ taking a break from the food. Thanks, technology!

Food was quite openly available past closing time until 9:30pm, which was the last call time for the buffet. Still then, there was plenty of food out, though it may have not been as fresh. 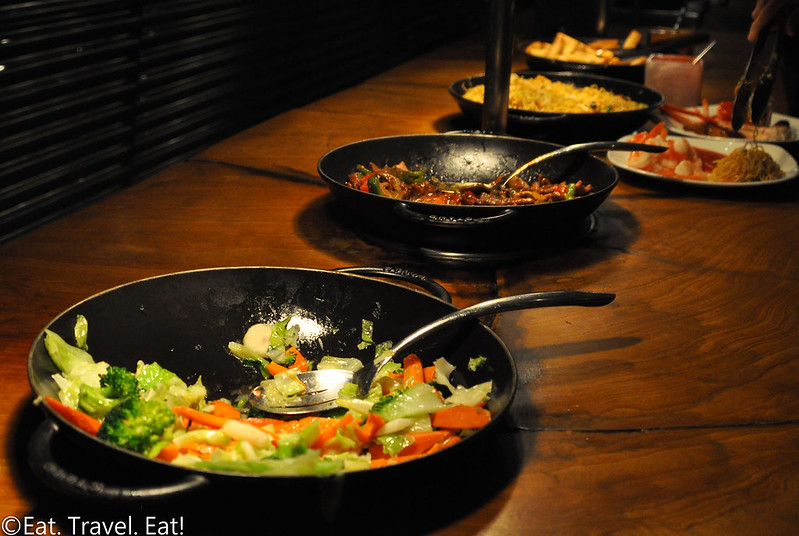 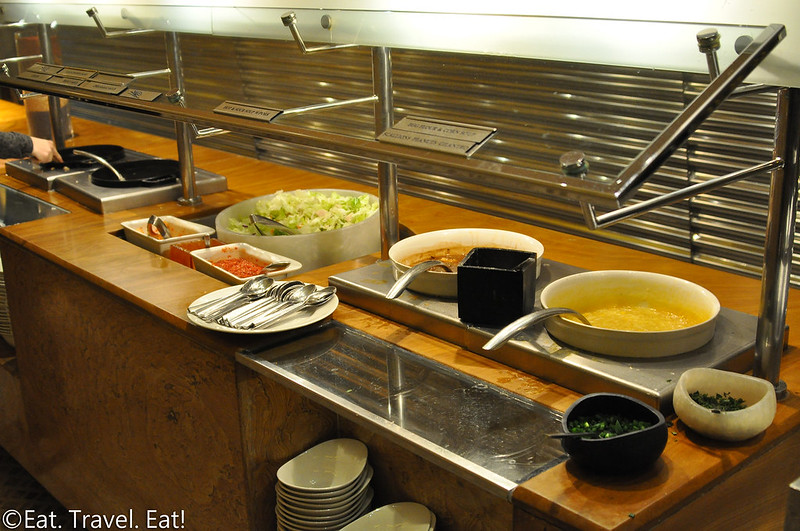 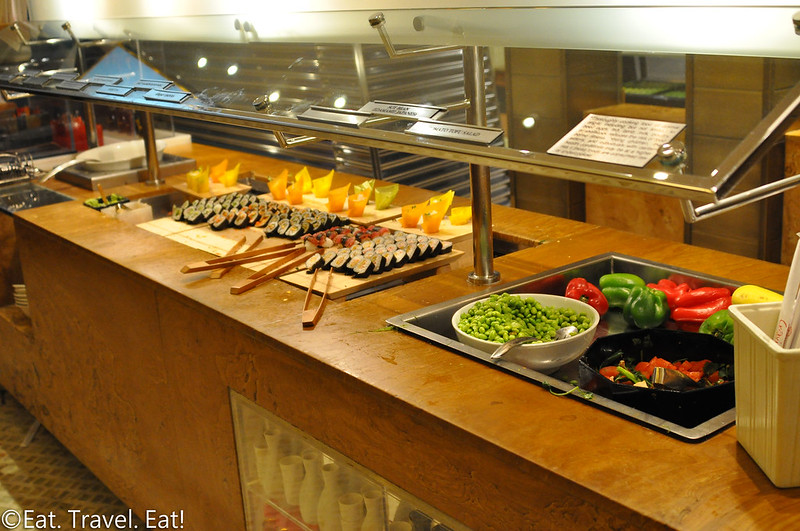 I liked the themed approaches to plating the food, in contrast to just regular hotel pans. The soups, especially, were nicely presented in large white rounded bowls. The hand rolls were quite unique with their colored wrappings, but it was also for this reason that I chose not to try them out. 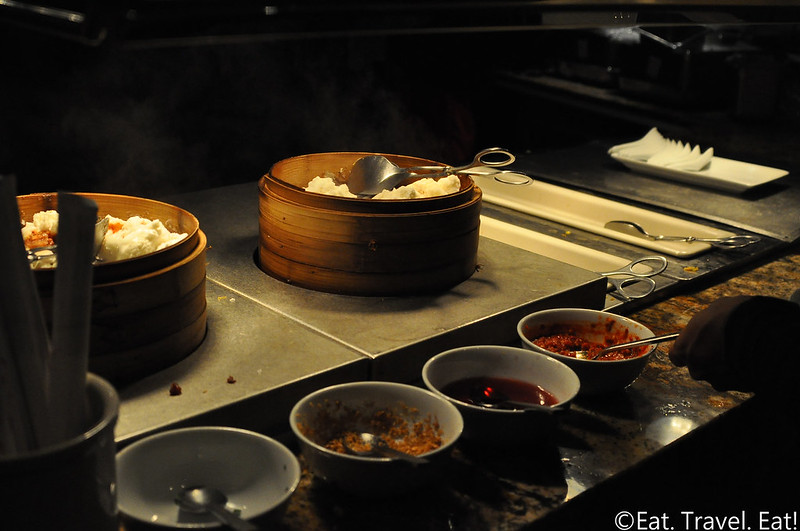 The noodles section also features steamed buns, potstickers, and the like, in addition to a make to order noodle soup area. Plus points for offering many traditional condiments like chili sauce, red vinegar, green onions, and fried garlic! 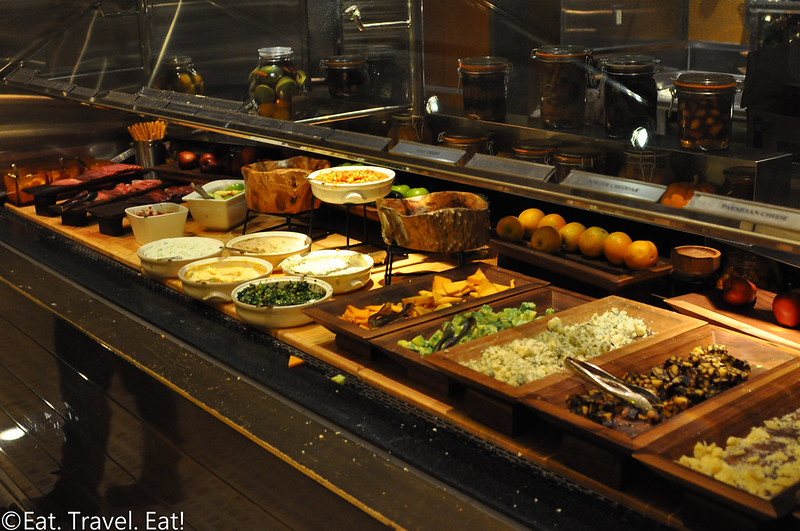 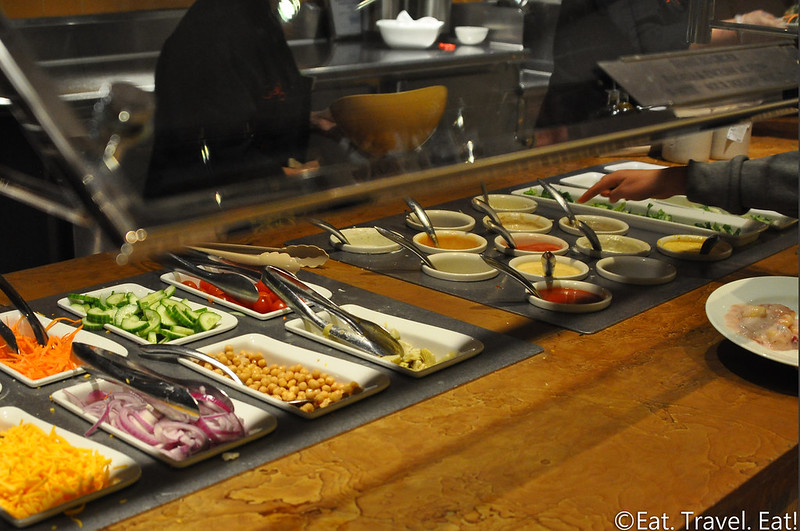 The make to order salad and delicatessen sections are quite nicely done and very well featured, with many different types of meats, vegetables, breads, and condiments available. Already prepared salads can also be found in different sections of the buffet. The gyros at the deli section, however, seemed to have closed by the time we visited (or no longer exists), though plenty of mediterranean toppings, like tzatziki, hummus and tabbouleh, were still available.

Not pictured, but the Italian section offered some pretty nice looking pizzas, formed into a rectangle shape instead of the standard circle, and topped with some quality ingredients. I didn't try any, for I wanted to save stomach space for other items. 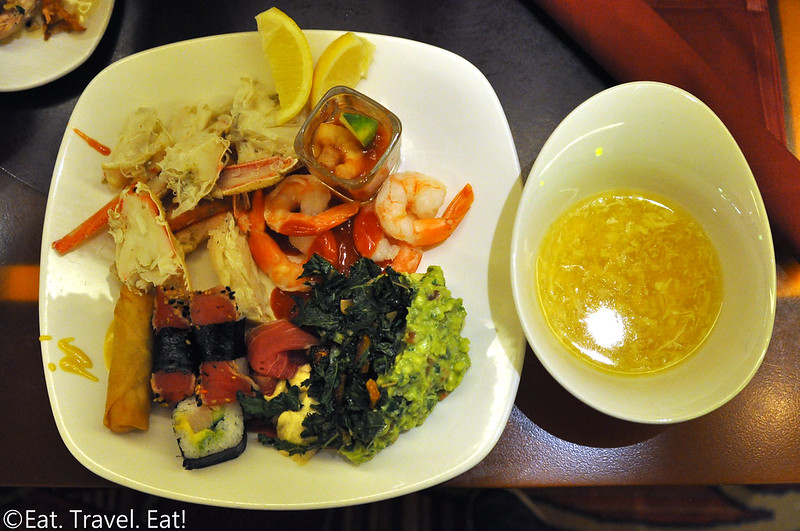 My first plate of food consisted of snow crab legs, ceviche (I had to after mistaking it last time), shrimp cocktail, guacamole, a massaged kale salad (from the rotisserie section, not the salad section), middle eastern hummus and prosciutto, 2 tuna nigiri and a Mirage Volcano roll, and an egg roll. On the side is a bowl of corn and egg drop soup.

There was quite a line for the raw bar section-- mainly for the snow crab legs. The ceviche, shrimp cocktail (traditional + a bay shrimp version), on the other hand, gathered little interest. Unfortunately, none of the items were very good. Though I happened to grab all the snow crab pieces with more meat--most were simply thin leg pieces--they were not very fresh and were almost flavorless. The ceviche had plenty of lime and tomato flavor, but only bay shrimp for the seafood. And the regular shrimp cocktail was fine, if a tad overcooked and not very flavorful (yet again).

More impressive were the guacamole, which was freshly made, as demonstrated by the varied textures, and the massaged kale salad, which was mixed with plenty of nuts and other ingredients. Cravings definitely does a great job in making sure all their condiments and salads are delicious! The prosciutto and smooth hummus were both competent renditions.

No eel nigiri was to be found, to my dismay, but the tuna nigiri, which was lightly seared and encrusted with sesame seed, was fine. The rice may have been overpacked slightly so and a tad cold, but the tuna was decent. On the other hand, the Mirage Volcano Roll was forgettable. The egg roll was standard-- crisp on the outside, veggies on the inside. Extra points to Cravings for featuring chinese hot mustard sauce as a condiment, though!

The egg drop soup with corn was a typical rendition, but was not very thickened. I really should have tried something fancier, like the lobster bisque, though! One companion tried the sweet potato bisque and was quite pleased. There's miso soup, hot and sour soup, chicken noodle soup, amongst other offerings. 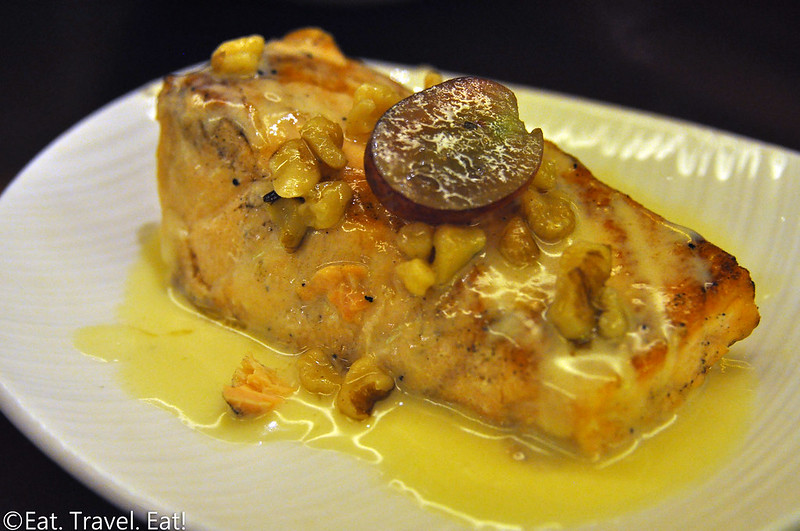 Following the footsteps of the Cosmopolitan Wicked Spoon Buffet's individual portions, the Mirage also features a individualized fish plate. For this dinner, it was the brown butter salmon with grapes and walnuts. This was quite exceptional, for the salmon was very tender, flaky, and smooth on the inside, with the walnuts providing some crunch and grapes providing some brightness. 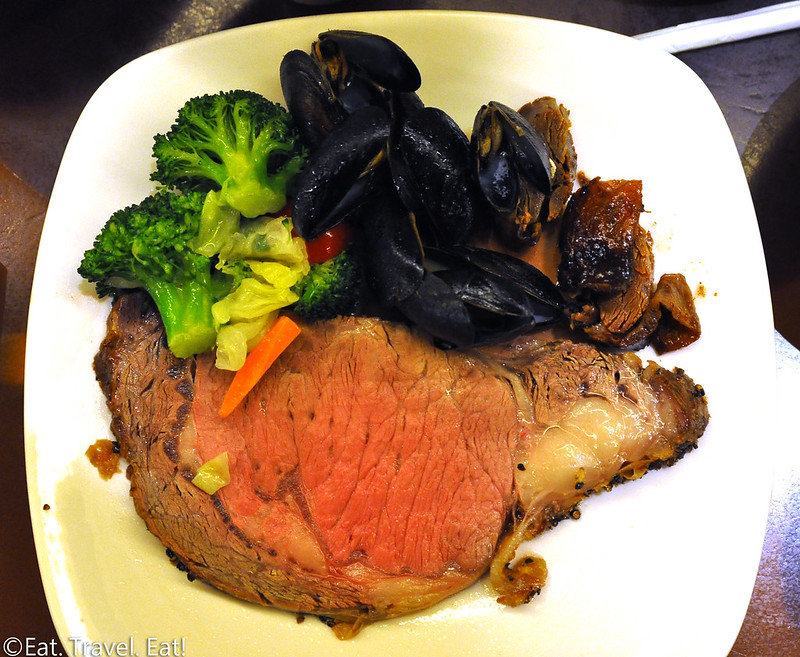 For my second plate, I headed for a piece of prime rib, sauteed veggies from the asian section, steamed mussels and clams (mussels were only apparent in the serving dish, however), and some roast duck from the noodles section.Everything in this plate except for the roast duck was quite tasty. The roast duck was inconsistent, for the pieces I received were quite horrible--just see how dried out it is! However, my companion got some fresh pieces of roast duck, and those were quite on point: crisp skin and juicy meat.

As for the prime rib (which I requested medium), it was quite tender and flavorful on the edges with a black peppercorn rub, while the center was slightly tougher. The auj jus, like my last visit, was flavorful and made on site. The vegetables were standard-- nicely cooked and not too crunchy. I did like that there was plenty of broccoli to be found, as well as cherry tomatoes. 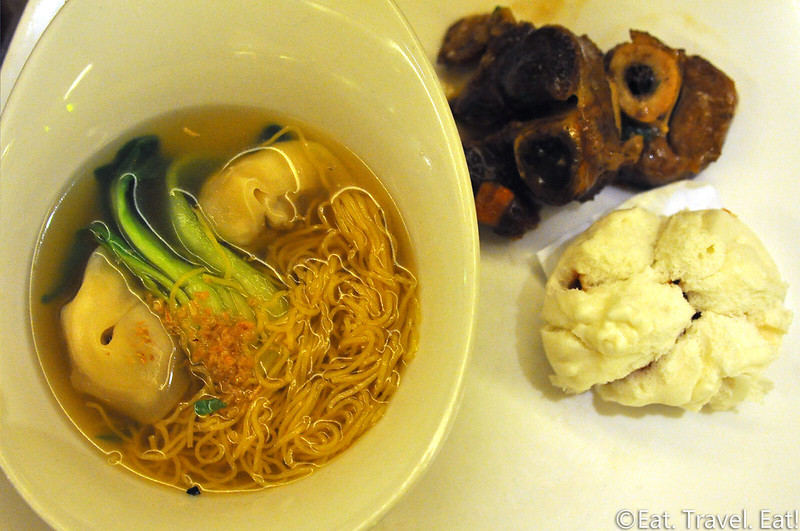 Cravings' noodle section is quite exceptional, as seen by the char siu bao and wonton noodle soup that I had. The char siu bao was on par with what I've had in the San Gabriel Valley, and featured a fresh, balanced, savory and sweet char siu filling in the middle and a soft, sweet exterior. The wonton soup noodle soup was assembled by a chef from China who has spent more than 12 years working in Las Vegas! My companions and I liked the light and balanced broth, toothsome noodles, and

On the other hand, the osso buco on the top right was dry, and not worth eating at all. The italian section really needs more foot traffic! 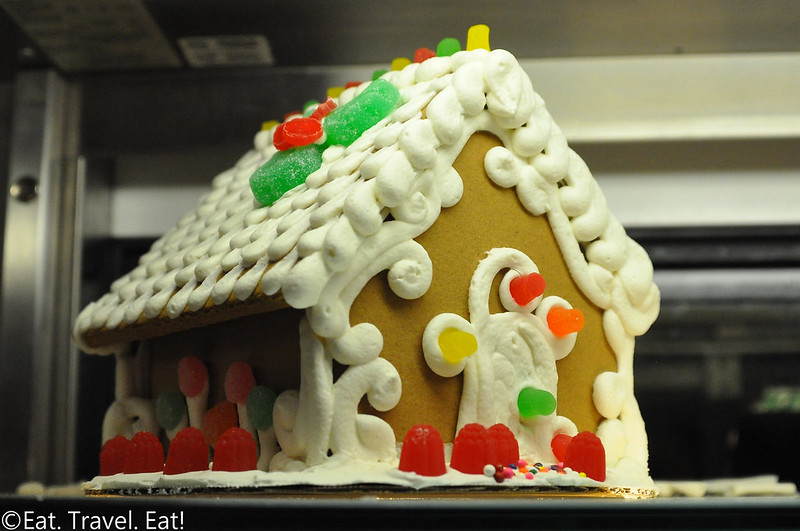 (Gingerbread houses on display for the holiday season) 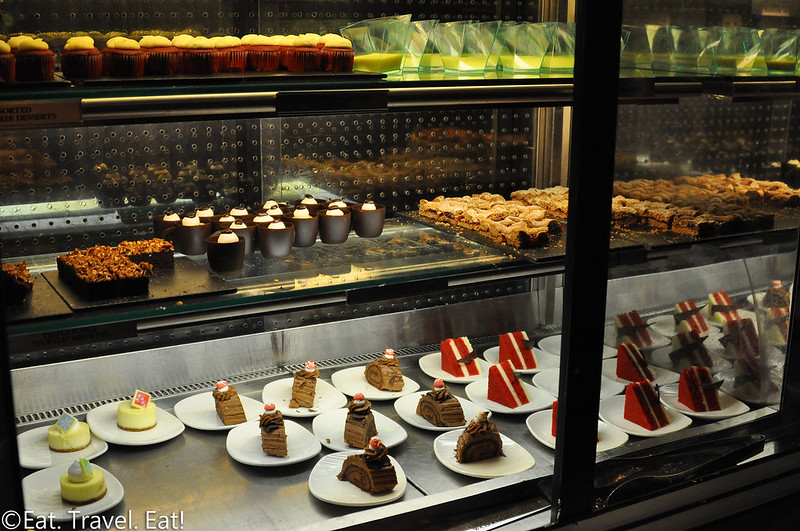 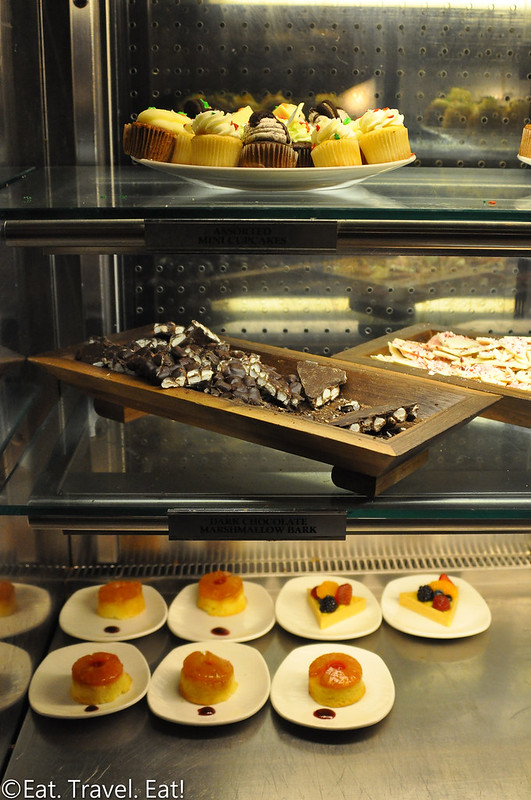 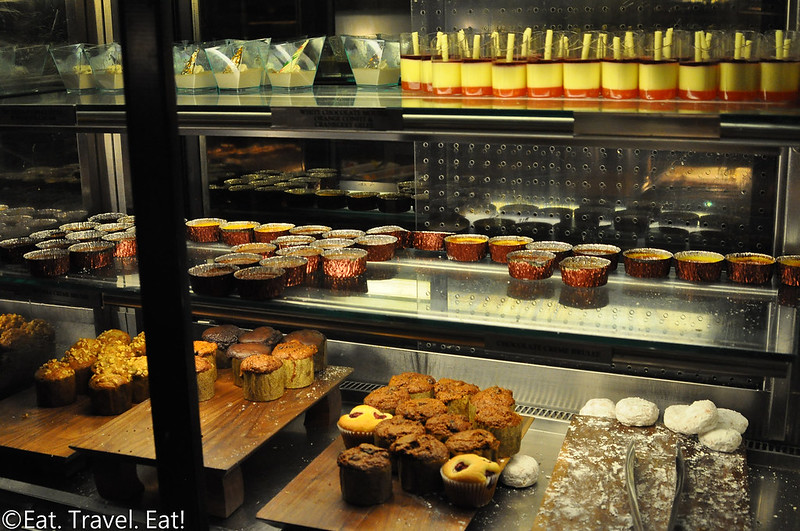 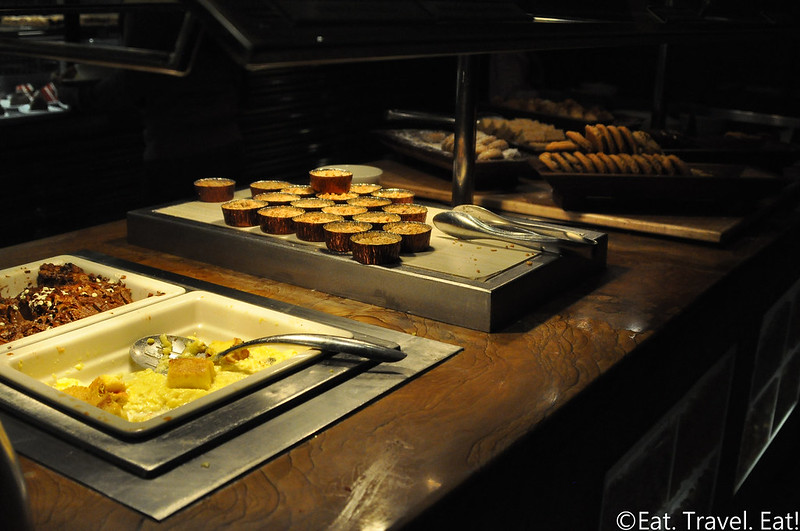 (a center section involving fruit, yogurt, hot desserts like bread pudding and crumbles, and baked goods like macaroons, cookies, rice crispies, etc.)
The desserts section at Cravings has always been strong, and to me this time, seemed to feature even more appealing desserts than five years ago.  Amiss, however, was the large tub of fresh whipped cream, swapped instead for more cut fresh fruit and yogurt.

Not photographed, but my companions really enjoyed the macaroons--crunchy on the outside, soft and tender with plenty of coconut in the middle--and muffins. Desserts are one of Cravings' strong suits! 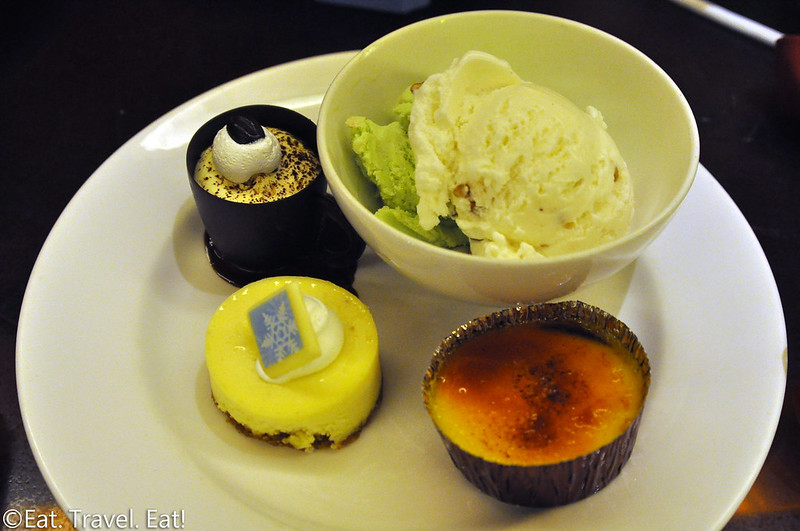 First round of dessert for featured vanilla bean cheesecake, a regular creme brulee (chocolate was also on offer),  generous scoops of butter pecan and pistachio gelato, and a tiramisu.

Though the cheesecake was featured as vanilla bean, the sour cream and cheese flavors were extremely strong in the cheesecake--pretty unique. It was also quite rich and dense in texture--not fluffy. I liked the wintry white chocolate decoration.

The creme brulee was not as strong as the cheesecake, for the caramelized sugar top was not apparent other than in looks. I could not crack the top at all, for it was way too thin and moist. The custard was slightly on the thicker side and was a bit overboard in vanilla flavor, but still decent.

Like last time, Cravings' gelatos were quite scrumptious, smooth, and not too heavy on the palate. The pistachio was very nicely flavored with some almond notes and was studded with pistachio. Same for the butter pecan: plenty of pecan, while being restrained with the butter flavor. 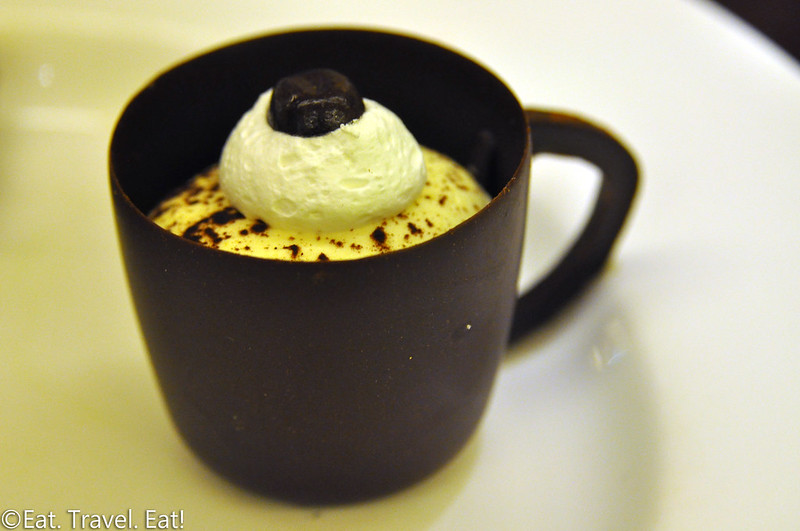 The tiramisu was plated in a single serve dark chocolate cup, and featured a dark chocolate covered espresso bean, some whipped topping (which I put aside), marscapone cheese filling, and a little bit of espresso soaked cake on the bottom. I would have liked more espresso layers in the tiramisu and a lighter filling (this was quite thick, and didn't feature enough cheese flavor), but with so many individual tiramisus to make, creating those traditional layers is a bit more difficult! 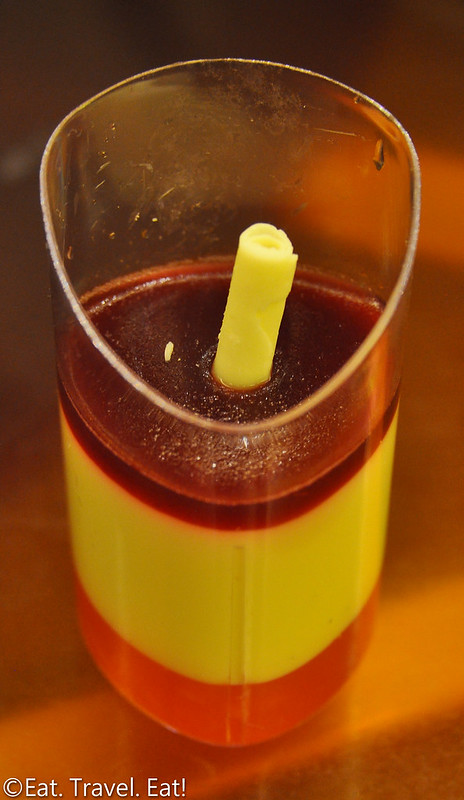 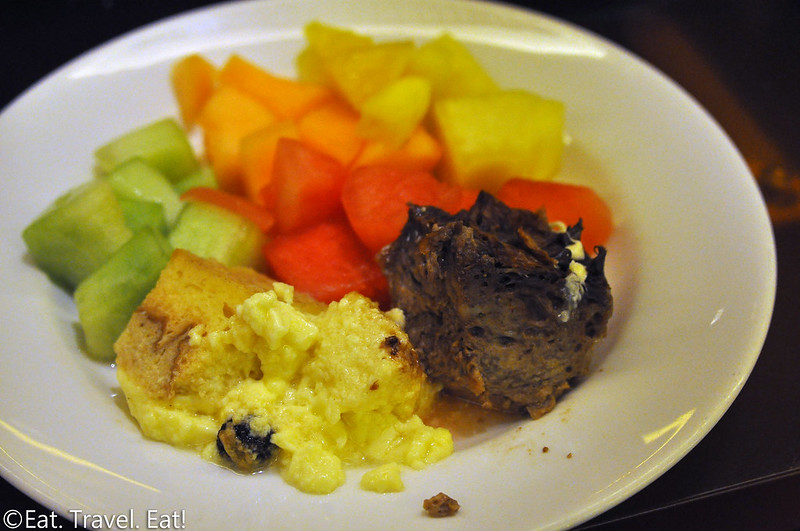 It happened to be 9:30pm, and another waitress informed us that they would be closing down. So, I decided to get another plate of dessert-- some mixed fruit, and both of the bread puddings, for one was called the Mirage bread pudding. With the hotel's namesake on it, it should be tasty.

And it was! The custard at the bottom of the pudding reminded me of an egg custard tart-- plenty of egg flavor, creamy, and not too sweet, while the top wasn't too dense and retained some bread texture. The chocolate croissant pudding likewise had plenty of bread texture, with the top having a few crunchy croissant layers and mini chocolate chips. It's no surprise why both bread puddings been standbys for all these years.

The cut fruit-- cantaloupe, honeydew, watermelon, and pineapple-- were all fine, other than the pieces I got were pretty much the leftovers at the bottom of each serving tray.

Go to Cravings if you're not looking to spend too much on a buffet, and also primarily enjoy salads, carved meats, traditional American foods, noodles and dumplings/buns, soups, and desserts. There is quite a spread, with plenty of everything-- vegetables, noodles, seafood, et cetera-- on offer, though you should be vigilant to see what will most likely be fresher and tastier. Do try to eat earlier, when there is a greater turnover rate. If you do happen to arrive late like we did, do note that they stop admitting people by 9pm, but really start to take away the food items at 9:30pm.