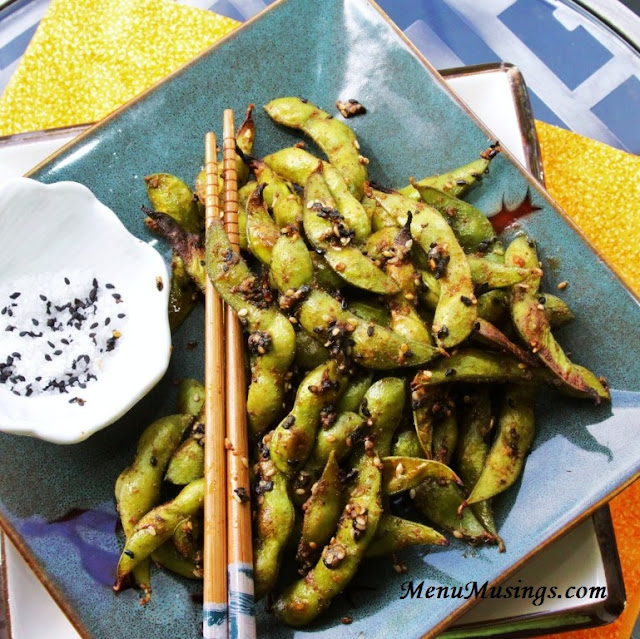 I know there are LOTS of edamame fans out there!  You order them as an appetizer when you visit your favorite Japanese restaurant, and you buy them individually frozen in your local supermarket for a quick and nutritious snack at home!  Our kids all love them, and they come in convenient, single serving packages ready to pop in the microwave to steam.  If you've never had them, you are missing out on quite a treat.  They are typically served steamed, in the pods, with the addition of a bit of kosher salt on the top.  You only eat the beans on the inside, but the seasoning on the outside of the pod is part of the fun flavor experience.
Well sometimes, its just fun to shake things up a bit!  Put a little pizzazz on them.  This recipe makes a quick little "dressing" of sorts that I added to the steamed pods.  I steamed the pods, added the dressing, then popped them under the broiler until they had almost a little char on them.  There was a big bold flavor on the outside, contrasted by the soft, almost buttery beans on the inside.  There is absolutely nothing at all wrong with the "traditional" way of serving edamame, but if you are looking for something fun to do with them, try this out! 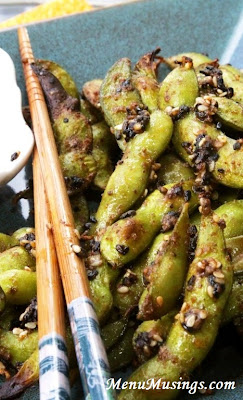 
Method:
Nothing to it!  Steam them in the individual serving bag for 3 minutes.  Mix them into the dressing.  Broil 5 min, flip them over, broil other side about 3 min.


Step-by-Step:
Mix together everything except the edamame in a bowl. 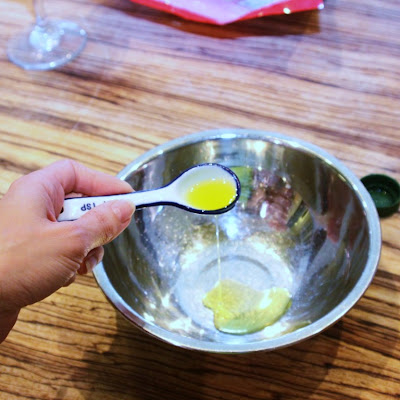 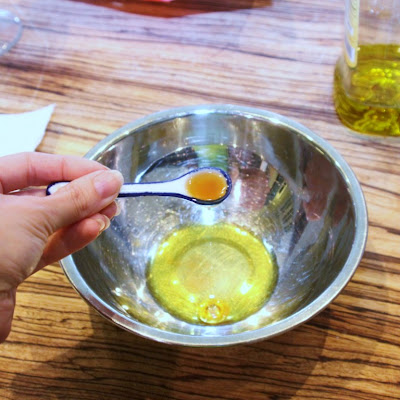 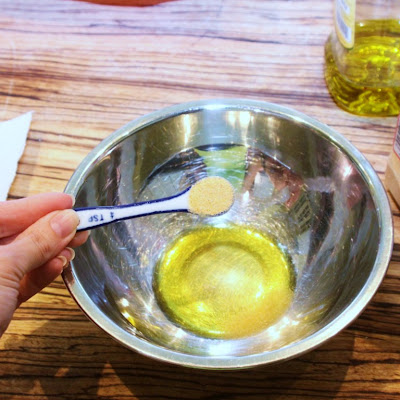 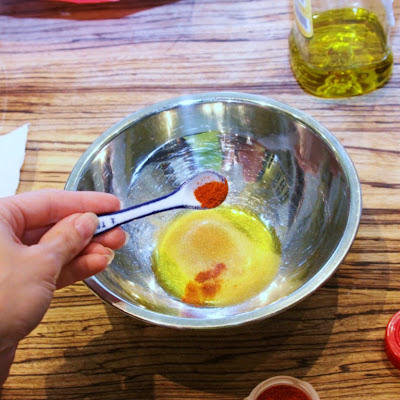 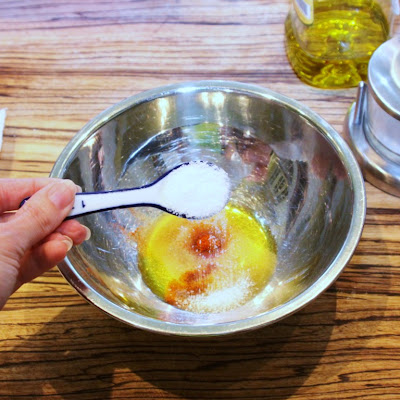 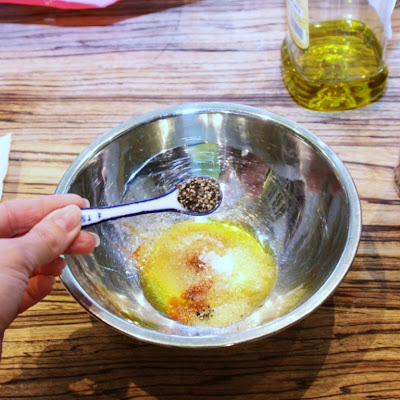 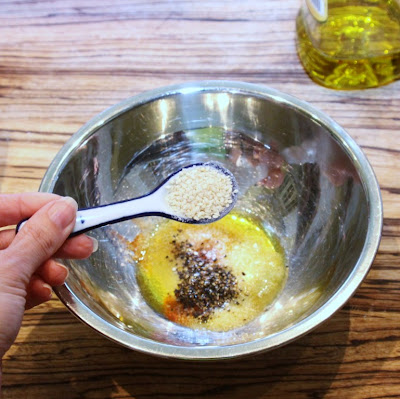 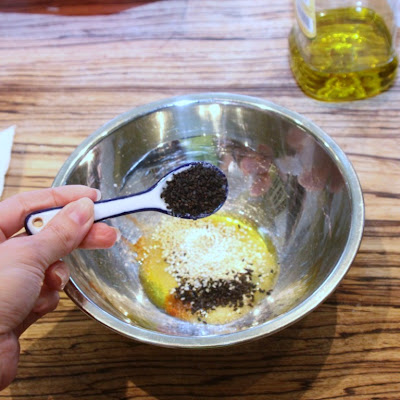 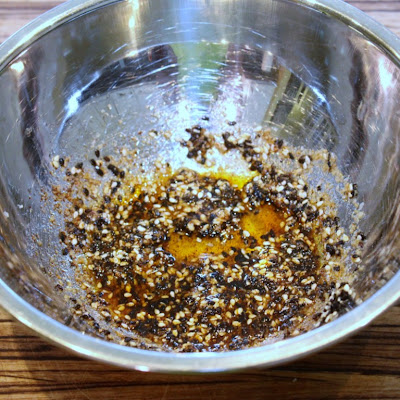 Stir to combine!! Steam the frozen edamame in the bag provided, according to package directions (three minutes in the case of the ones I have). 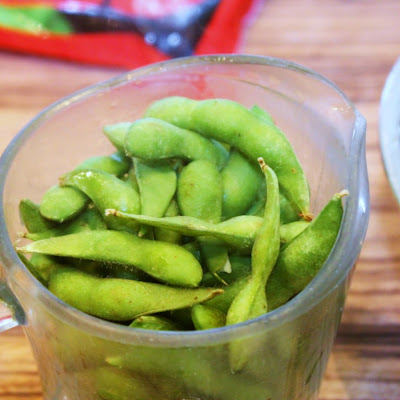 Mix the steaming hot edamame with the dressing. 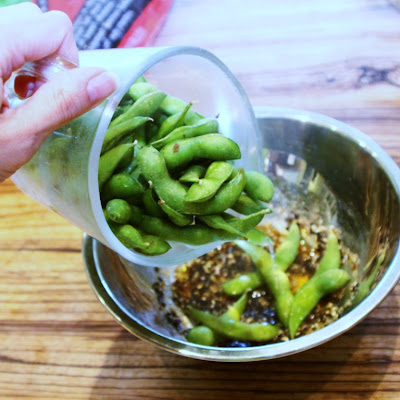 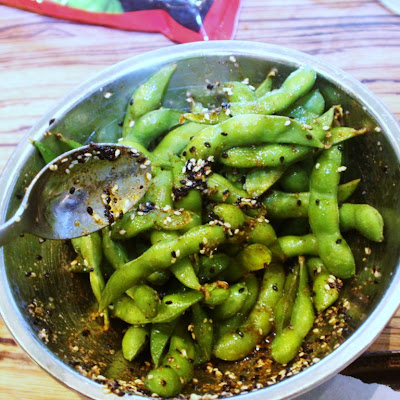 Turn them out onto a baking tray.  I lined mine with parchment paper for super easy clean-up. 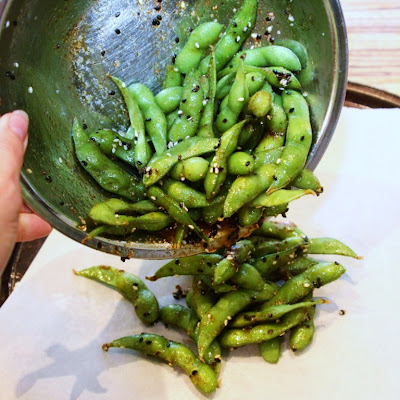 Pop them under the broiler until they have the color on them that you want.  I did 5 minutes on side one, then I flipped them and broiled an additional 3 minutes on side two.  Serve hot and enjoy! 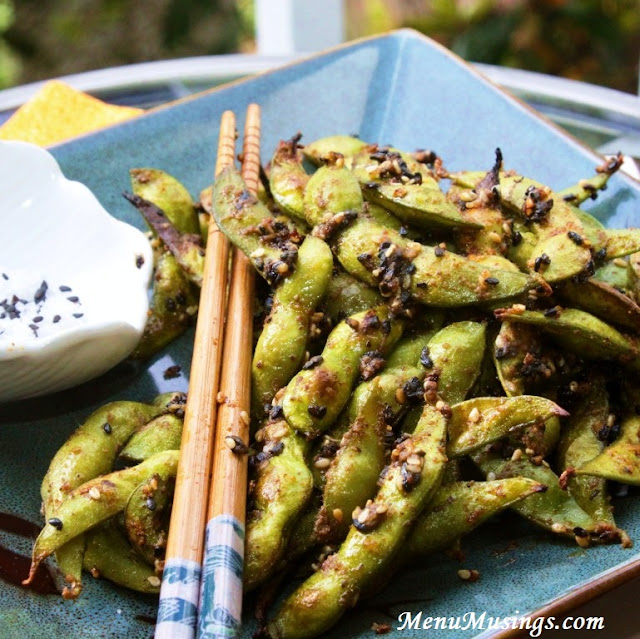 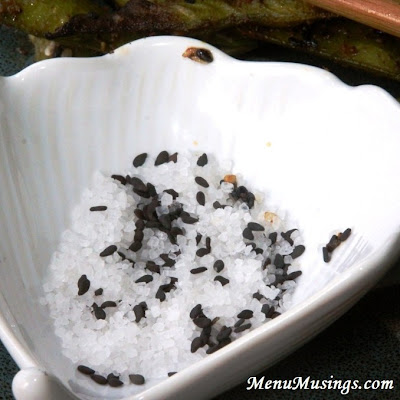 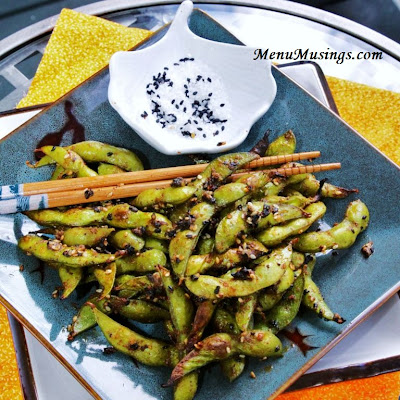 I hope you've enjoyed this recipe.  There are lots more where this came from!
Please visit my Recipe Index for more great recipes to throw together in your kitchen!  Some are totally from "scratch," while others make use of convenience items to get dinner on the table quickly!
Order the Menu Musings Cookbook! 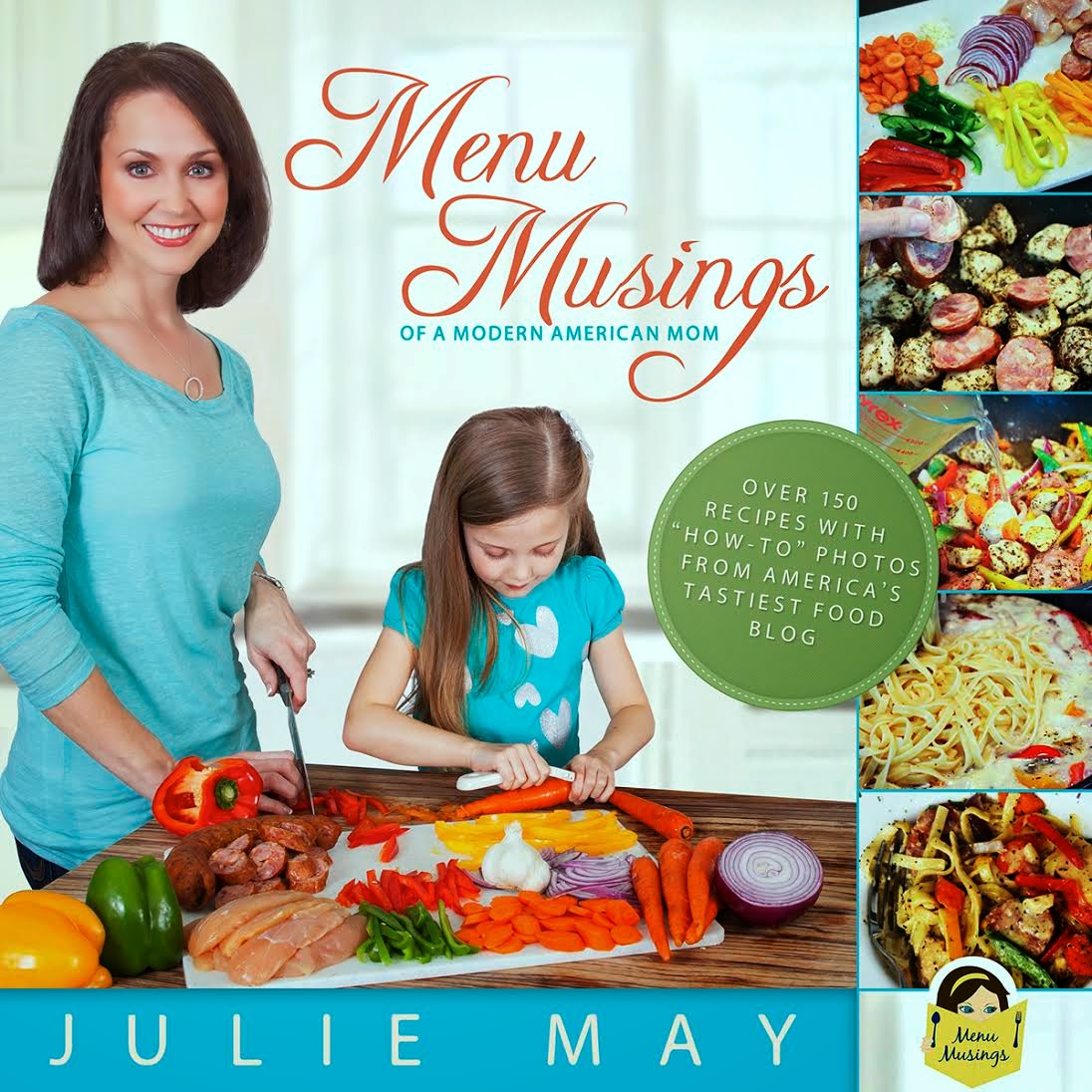 Here are a few more appetizer ideas to get you started:
Mozzarella Caprese Skewers 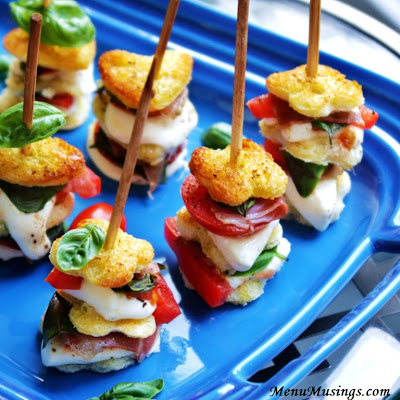 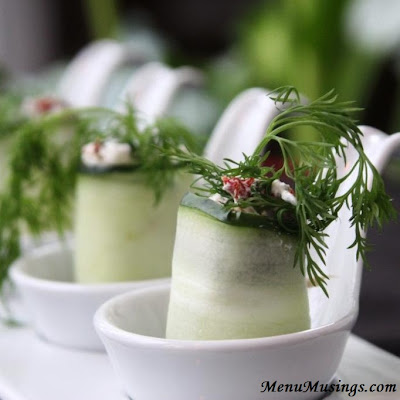 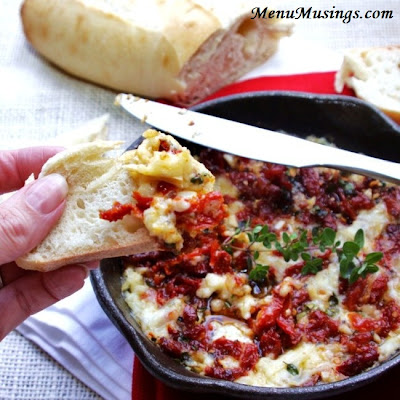 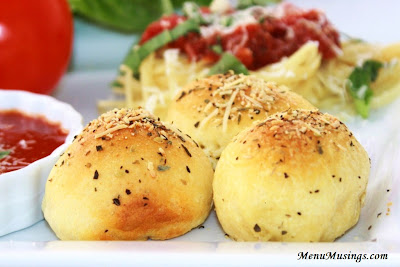 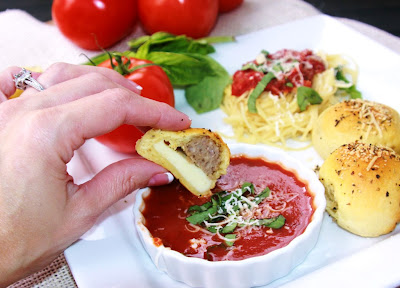 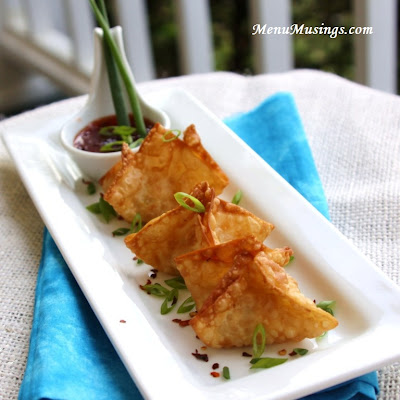 Food Nerd Notes:
Here's a little bit about edamame, in case you are still wondering. Edamame is a preparation of immature soybeans in the pod, found in the cuisine of Japan, China, and Hawaii.  The pods are boiled or steamed and served with salt.  Outside East Asia, the dish is most often found in Japanese restaurants and some Chinese restaurants but it also has found popularity elsewhere as a healthy food item. In the United States it is often sold in bags in the frozen food section of grocery stores.
The Japanese name, edamame literally means, "twig bean" (eda = "twig" + mame = "bean").  Salt is a typical condiment for edamame. In Japan, arajio is the preferred salt, because it is a natural sea salt. This coarse salt is wet with brine, thus loaded with marine and mineral flavors.The earliest documented reference to the term "edamame" dates from the year 1275, when the well-known Japanese monk, Nichiren, wrote a note thanking a parishioner for the gift of "edamame" he had left at the temple. Green soybeans in the pod are picked before they ripen in order to prepare edamame. The ends of the pod may be cut before boiling or steaming.  Then the pods are boiled in water, steamed or microwaved. The most common preparation uses salt for taste. The salt may either be dissolved in the boiling water before introducing the soybean pods, or it may be added after the pods have been cooked.
Click here to Subscribe to MenuMusings so you won't miss a thing!

Please forgive the extra space here.  I have tried diligently to remove it, but to no avail.