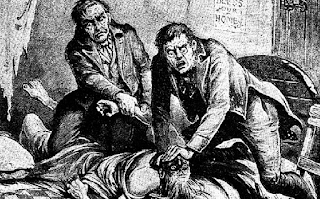 Long before Burke and Hare’s body snatching business or resurrectionists began stealing bodies from the graveyard, medical doctors in the 17th century had an intriguing way to see inside the body using small anatomical sculptures carved from ivory. 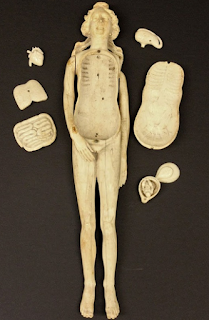 These tiny manikins are believed to have been carved in German during the 1600s. Each is a reclining figure between 4 to 8-inches long with removable abdominal walls and internal organs. Most manikins are of the female body, which could have assisted in the explanation of pregnancy and childbirth. Use of the manikins waned in the 18th century and was replaced with wax models and cadavers. Over time, these once state-of-the-art medical images became rather bizarre trinkets and collectors items for the rich.
Little has been known of their origins until recently when researchers using micro-CT identified that the material used was ivory. Before the tests it was thought they might have been carved fro a combination of wale bone, deer antler and ivory. 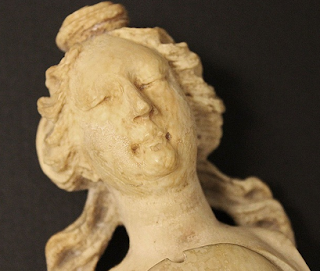 Today, the largest collection of ivory manikins can be found at Duke University in Durham, North Carolina where 22 of 180 known manikins are kept. Purchased by Duke thoracic surgeon Josiah Trent and his wife in the 1930s and 40’s – years before the ivory ban of 1989 went into effect – the fragile artifacts have been stored in the library’s vault. 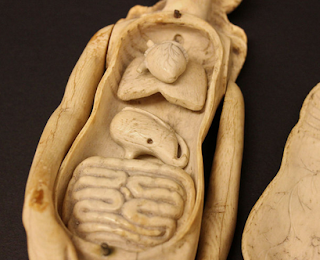 The manikins are extremely life-like and hinged, which would have made them beneficial in the study of various diseases during the late 1700s.
Not only are the manikins a look into the medical practices of the 17thcentury, but today the ivory dolls are also viewed as artistic creations.
Other locations for the rare manikins are The New York Academy of Medicine Library, which is home to seven manikins, including a rare male and female pair. And at least one female manikin from the Special Collections and Rare Books at the University of Missouri Libraries.
(Photos from Special Collections and Rare Books, University of Missouri Libraries)