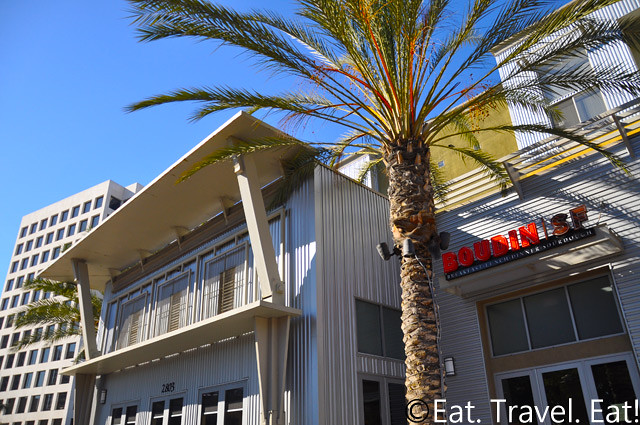 One of my first introductions to the Irvine outside of UC Irvine was a conference that I attended two years ago. You can see some of the posts I wrote about it by clicking HERE. Well this year, I attended the same conference again, and we had to find a place for breakfast. After looking at the dismal options at the Cafe inside the Hyatt Regency (a good thing: a small cup of coffee is 1.50 USD there), we headed out mindlessly to find some restaurant. It did not take long for us to find Boudin SF, which was just right across the street from the hotel's main entrance.


There, it was like a smaller version of Boudin at San Francisco's Fisherman's Wharf; there was yet again another window display of a baker at work, a line to purchase food, a large display of various breads, and a large sitting area to enjoy the food. Since it wasn't sunny indoors, I could capture the baker working without getting much glare from the window.

The Boudin SF concept is similar to that of some "fast-casual" restaurants, like Panera. The customer orders their food at a line, and he or she has their own control on seating and drinks. The employees have control over the food, delivering the food to the table, and making sure that the food meets the customer's expectations. 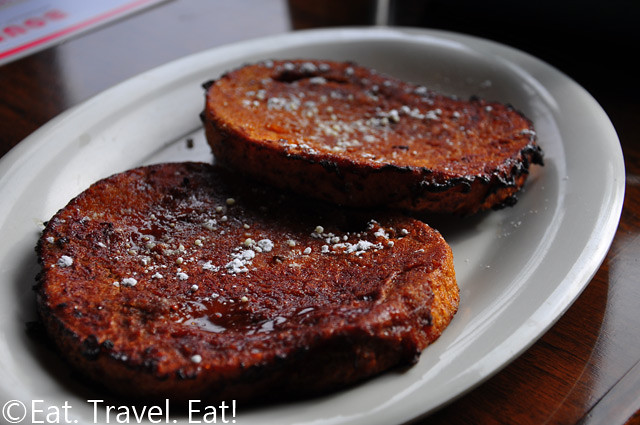 The menu expectedly parallels with that of Boudin's flagship location's cafe. Boudin SF offers some breakfast selections too, such as the sourdough french toast (5.99 USD). It was probably one of the darkest, most flavorful looking french toasts I have seen in a while. Another friend enjoyed a bacon and cheddar cheese sandwich (4.29 USD), which was definitely larger, fresher, and cheaper than what was being offered at the hotel. 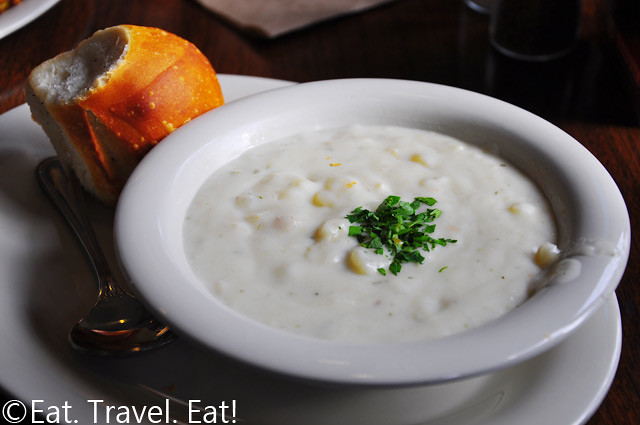 The rest of the group, including I, enjoyed bowls of clam chowder (5.99 USD). Boudin usually offers these in bread bowls, which was what my friends ordered the clam chowder with, but I asked them to omit the sourdough bread bowl (resulting in a price decrease of 50 cents). What I got instead was a bowl of clam chowder but with a sourdough roll on the side. The sourdough at this location's Boudin SF was quite different than that of the flagship location; the crust was thin, and almost almost smooth in appearance, while the interior of the bread was extremely soft and had a lack of large air bubbles. The clam chowder, on the other hand, was just like that of Bistro Boudin; it was thick and was full of vegetables and clam flavor.

Based of the observations of the kitchen freshly preparing the majority of the items, the in-store bakery, and the food we enjoyed, Boudin SF is quite similar to the original in San Francisco. All the favorites are here, along with some additional items, but at prices that are much more easy to ingest. (for example, that clam chowder would cost about 1.30 USD more in San Francisco)