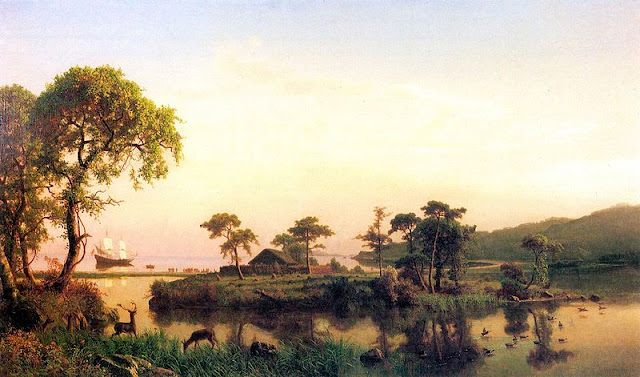 Gosnold at Cuttyhunk, 1858, Albert Bierstadt, before heading west.From the nineteenth century, if one were to think of "American" art, first and foremost, the landscape comes to mind. Oh, there were portraits, some genre, and late in the century, a fascination with still-lifes, but the one type of painting that totally dominated all others was the American landscape. I've written extensively of Thomas Cole and the first generation of Hudson River School painters, and John Frederick Kensett who led the second generation (sometimes called the Luminists). By the 1850s, there came the third generation (some would say the last generation). Leading this group would be the German-born Albert Bierstadt. Each generation had their own traits. Cole's work was idealistic and naturalistic. Kensett's luminous, simple, eloquent. Bierstadt's work was grandiloquent. And not satisfied with the well-trod vistas of the Eastern mountains, Bierstadt transported the Hudson River landscape tradition westward to where the real mountains were--Wyoming, Colorado, Utah, Nevada, and finally, California, where he found a new, even grander, more pristine coastline to glorify in paint and sell to his rich, eastern art lovers. He founded what has been called the Rocky Mountain School of landscape painting. 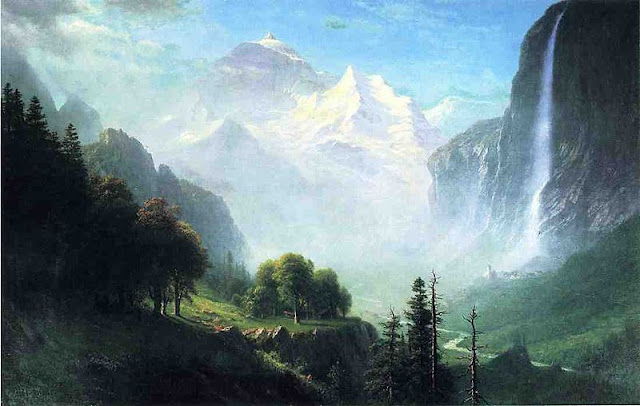 Staubbach Falls, Near Lauterbrunnen, Switzerland, 1865, Albert Bierstadt,
not just American mountains.
Bierstadt was born in 1830 and came to this country at the age of two. He grew up in New Bedford, Massachusetts. Though displaying exceptional talent as a child, but with no more art training than was available in his local community, he set off for Dusseldorf, Germany and the renown art academy there where he mastered his craft. There and in Rome, he was exposed to the best of the European tradition of landscape painting. Yet aside from a certain debt to Claude Lorrain's landscape compositions, he seems to have brought back little stylistically. Back in this country in 1859, an ambitious, not to mention self-promoting, adventurous sort, Bierstadt caught the first train west. Never mind that it was a wagon train, led by Colonel Frederick Lander to chart a path for the future transcontinental railroad. Along the way, he saw for the first time the real American landscape, rugged, raw, rivaling the Alps, and relegating the so-called "mountains" he'd painted in his youth, to mere foothills. 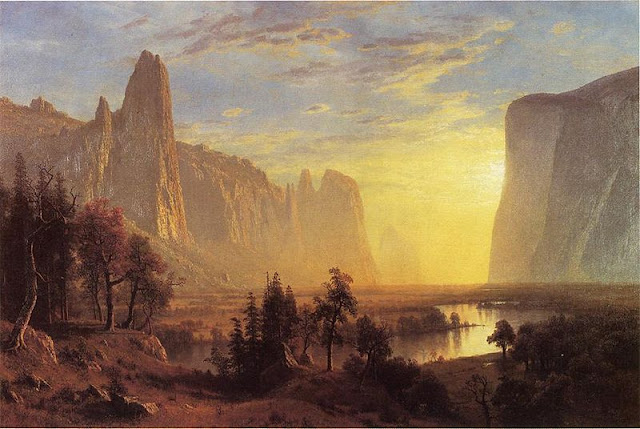 Yosemite Valley, Yosemite Park, c. 1868, Albert Bierstadt,
the Bierstadt we've all come to know and love.
In 1863, he went back west again, having established his reputation in the East as America's preeminent landscape painter. This time he took his younger brother (a fledgling photographer), and his friend and writer, Fitz Hugh Ludlow from the New York Post to record his adventure. This time they made it all the way to California. He painted a number of oil sketches of the most rugged, inaccessible stretches of the northern California coast, its Native Americans and its native sea lions. When he returned east, he turned these sketches and his brother's photos into massive, 8-foot by ten-foot paintings selling for up to $25,000 (an astronomical sum at the time). A third trip west in 1881 (this time on a railroad train) took him to the desert Southwest and Southern California. He died there in 1902, having witnessed and painted firsthand, the opening of the West. But by the time of his death, the West was no longer that which he'd painted in his youth, nor were his paintings welcomed in the East as they had been after the Civil War. Tastes had changed. Art collectors in the East were discovering something new on the landscape horizon--French Impressionism, and soon, its cosmopolitan American stepchild. 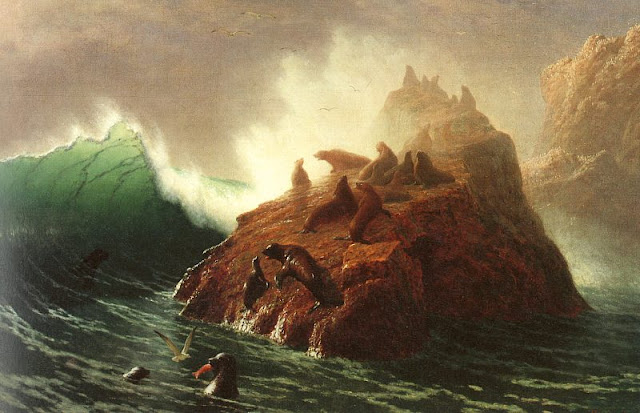 Seal Rock, 1872, Albert Bierstadt, the Bierstadt we may no know so well.